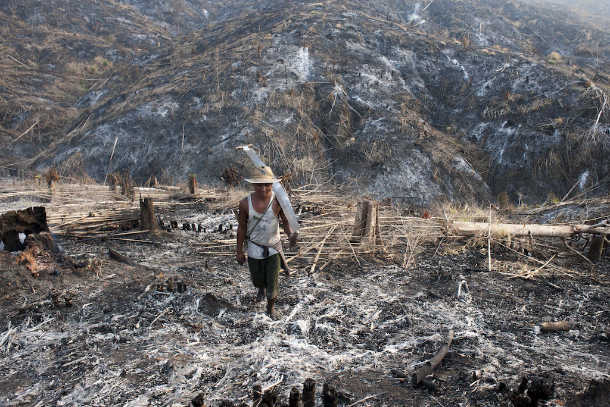 This 2014 file photo shows a worker carrying a saw where teak trees once grew in the Bago region of Myanmar after the land was scorched ahead of replanting. Logging in Myanmar exploded under the former junta as the generals tossed aside sustainable forestry practices in their thirst to cash in on vast natural resources. (Photo by Ye Aung Thu/AFP)

Large amounts of Myanmar’s rare teakwood are being smuggled illegally into neighboring China owing to “systematic corruption” within the top echelons of the Southeast Asian nation’s officials, according to the Environmental Investigation Agency (EIA).

The British NGO has reached this conclusion after conducting a two-year undercover investigation to unravel the clandestine, highly complex international network behind the illegal trade in Myanmar’s protected teakwood, which is widely deemed the best of its kind in the world and is highly prized on the international luxury market.

“There is official state corruption on both sides of the [Chinese-Burmese] border,” Jago Wadley, the agency’s senior forest campaigner, said during a briefing on Feb. 20 with foreign journalists in Bangkok. “China has its role in this trade and so does Myanmar [where] senior military officials are in on it.”

In its newly released report “State of Corruption: The top-level conspiracy behind the global trade in Myanmar’s stolen teak,” the EIA details a nearly three decades-long partnership between a handful of shadowy Chinese traders and Burmese military officials who have been smuggling vast amounts of high-quality teakwood out of Myanmar in violation of both local and international laws.

“This report exposes systematic corruption at the highest levels [in Myanmar],” Faith Doherty, head of the EIA’s Forest Campaign, told foreign journalists during the launch of the report in Bangkok.

“There are some good, very brave people in Myanmar who are trying to do their best [to protect the country’s forests], but that’s very hard to do in the face of systematic high-level corruption.

“Myanmar can’t solve this problem alone. Beijing has to support any action that stops imports of teakwood from Myanmar into China. But we’ve seen limited will and limited action from China. It’s time Beijing stepped up and handled this problem effectively.”

For its part, Myanmar has imposed a ban on deforestation in protected areas and has outlawed unauthorized exports of teakwood from the country. Yet illegal shipments of teakwood continue to enter Yunnan province via adjacent Kachin State.

Burmese government officials have repeatedly blamed Kachin and other ethnic insurgents for the illegal trade in teakwood, but the AIE’s researchers dismiss those claims.

“China has played the biggest role of any nation in the illegal expropriation of Myanmar teak and other hardwoods,” the EIA report notes.

The sale of “Myanmar teak through formal channels is as corrupt and illegal as any,” the report adds. “For a natural resource so beloved and culturally important to Myanmar and its people as teak, allowing its near-extinction would be the biggest crime of all.”

Once teak forests thrived across much of Myanmar, but these days teak woods are limited to a few areas in the northern part of the country.

But it isn’t just teakwood trees that are at risk in Myanmar. Between 2010 and 2015 alone, the country lost 546,000 hectares of forest, which was the third-highest rate of deforestation in the world at the time. Since 1990, Myanmar has lost a fifth of its forest cover to logging and development.

The massive loss of teakwood and other tree species has had a profound impact on local biodiversity. Numerous exotic animals, from wild elephants to tigers to hornbills, are now facing the threat of extinction in Myanmar’s shrinking forests.

During their undercover investigation, which covered several locations from the Myanmar-China border all the way to Singapore to Hong Kong, the NGO’s researchers managed to uncover the identity of a shadowy Chinese trader who once almost singlehandedly pulled the strings behind the illegal international trade in Myanmar’s teakwood.

The Hong Kong-born kingpin, Cheng Pui Chee, aka Chetta Apipatana, set up several trading companies in Thailand and from the late 1980s onward managed to win several logging concessions in Myanmar. The Chinese trader, the EIA’s researchers say, made a deal with senior military officials in Myanmar to buy high-quality teakwood at knockdown prices by classifying it as low-quality wood.

Cheng and his accomplices would then pocket hefty profits once the high-quality teakwood was sold at the proper going rates on the international market. “He was given impunity to misgrade teak logs in a grading fraud,” Wadley notes. “He got the best teakwood at low prices.”

Although Cheng has since died, the network he built continues to operate. Teakwood smuggled illegally out of Myanmar is still sold in China, Europe, the United States and elsewhere via the regional web of connections the Chinese trader set up.

“This network needs to be brought into hand,” Wadley says.

As part of that effort, China should intensify its efforts to ban all imports of teakwood from Myanmar and see to it that the ban is comprehensively enforced, the EIA says.

“It’s not just a question of enacting laws,” Doherty stresses. “If you have a ban, you had better enforce it.”