Myanmar students seize political freedom in classrooms and on the streets

Some urge cautious approach to reforms, while others are less patient ahead of November elections 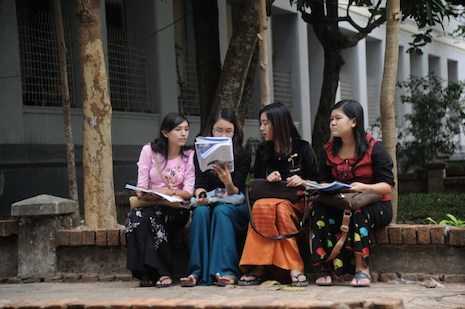 By Jerome Taylor for AFP, Yangon

Every morning Su Wai Phyo wakes before dawn to do something that was until recently banned in Myanmar: study politics.

The 23-year-old is one of a handful of students taking part in a new political science diploma for postgraduates at the University of Yangon — a course that would have been unthinkable under Myanmar's brutal junta.

"Young people need to understand politics," she enthuses after a recent early morning class. "They need to know about those who are ruling us, whether those in power are doing good things for us or doing bad things."

She will be among millions of new voters able to choose who governs them for the first time in decades when Myanmar goes to the polls later this year.

It is a decision she will exercise amid a huge flowering of public political discussion after harsh military rule gave way to a quasi-civilian reformist government in 2011.

But while Myanmar's turnaround initially won widespread praise, prompting a flood of foreign investment, there are fears it is now backsliding on key reforms.

Those fears were heightened earlier this month when police violently cracked down on student-led protesters calling for education reform, arresting at least 130 and sparking international condemnation.

Myanmar's former military rulers are historically suspicious of students, who have been at the forefront of several major uprisings, including a mass 1988 demonstration that ended in a bloody military assault and saw the rise of Aung San Suu Kyi's opposition.

The months of student rallies have rattled the current government, fearful that the demonstrations could spiral into a wider destabilizing protest movement ahead of elections expected in November.

The violent scenes in the town of Letpadan, where students were charged by baton-wielding security forces after they tried to break through police lines, is far removed from the leafy confines of the University of Yangon where optimism and political discourse abounds for the first time in years.

Once celebrated as one of Asia's leading universities, it was shuttered for much of the last two decades by the junta, its colonial-era buildings languishing in fields of long grass.

It was reopened in late 2013 as part of government attempts to overhaul an education system that calcified under army rule.

"If I had tried to study political science before 2011, my parents would be worried about me going to prison," Su Wai Phyo says.

Instead, every weekday before heading to her job at a local NGO, she attends two hours of lectures and seminars on the same campus that gave birth to the 1988 protests.

"We were very afraid of the military government at the time," he says. "We think everywhere there are spies, that's why we didn't talk about politics."

Professor Chaw Chaw Sein, head of the international relations department that runs the course, says her students burn with an appetite to learn the subject.

"We can talk and discuss, not only about politics around the world but also the political changes and politics in Myanmar," she says.

The academic proudly describes herself as one of the "88 generation". But when that movement was crushed she decided to work within the system.

But Chaw Chaw Sein believes a gradual transition towards democracy is the right route for Myanmar — fearful of the chaos that could be unleashed if full freedoms were granted overnight.

"Although [the] international community are criticizing that this is just a semi-democracy, a semi-civilian government, we have to take lessons from the Soviet Union's disintegration," she says. "Gradual change is better for our political culture."

But many young people feel change needs to come quicker.

In a rickety wooden building in downtown Yangon before the latest crackdown, activists from the All Burma Student Federation Union met to strum guitars, play with the union's dog "Lucky" and plan their protests.

The students say a 2014 education law curbs academic freedom and want it altered to include free and compulsory schooling until children reach their early teens, permission to form unions, and teaching in ethnic minority languages.

"What we are demanding is autonomous universities, universities that are independent of the government," says Min Thawe Thit, a leader in the All Burma Student Federation Union who has since been arrested.

"We don't want top-down policies imposed, we want decisions to be made from the bottom up," he adds.

Nicholas Farrelly, a Myanmar expert at the Australian National University, says the latest crop of student protesters have come of age during "a very significant and abrupt set of transformations in Myanmar society".

But they are also political ingénues compared to their forebears from the '88 generation.

"[They] don't always appreciate just how dark the darkest of the years in Myanmar were," he says.

Neither generation wants the dark days to return.AFP