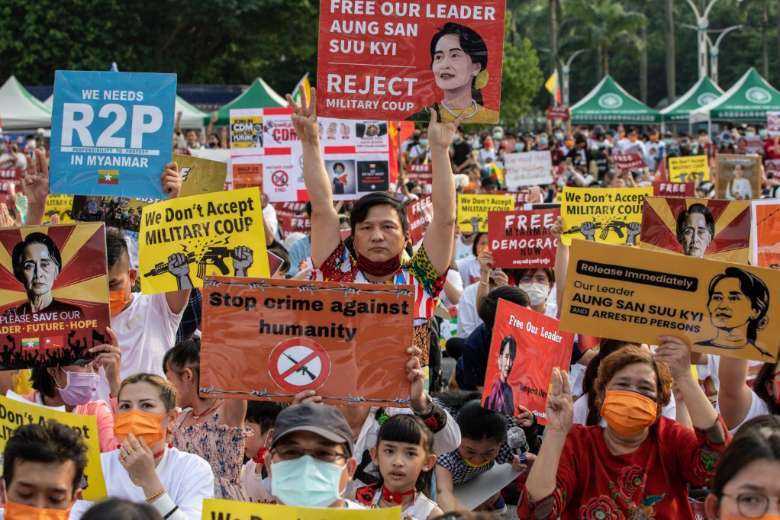 People making the three-finger pose, a symbol of Myanmar's anti-coup protesters, hold a sign with a portrait of Aung San Suu Kyi in Taipei, Taiwan, on March 28. (Photo: AFP)

A Myanmar shadow government working to overthrow the junta launched a daily radio programme on Friday as it seeks to battle military-backed media for supremacy over the airwaves.

Myanmar has been in turmoil since Aung San Suu Kyi's administration was ousted in a February coup, sparking huge pro-democracy protests and a bloody military crackdown.

Dissident lawmakers from her party dominate a National Unity Government (NUG) in hiding or in exile, rallying support for the resistance on international news broadcasts.

On Friday the first of a twice-daily 30-minute Radio NUG programme went on air, providing Covid-19 updates, details of alleged military atrocities and reading out letters from democracy supporters.

Another section was dedicated to local self-defense forces that have sprung up across Myanmar to battle junta forces — often using hunting rifles or weapons manufactured at makeshift jungle factories.

"We are sending all our best wishes to you and we are very proud of you," read a letter one listener.

While promoting the launch, the NUG also urged listeners to buy a radio and tune in — likely an attempt to dodge any junta-enforced internet blackouts.

Friday's programme was uploaded to the group's official Facebook page, and it was not clear where or how it would be able to access radio frequencies.

The junta has classified the NUG as "terrorists", meaning anyone speaking to them, including journalists, can be subjected to charges under counter-terrorism laws.

Security forces have killed more than 1,000 civilians since the February putsch, a monitoring group said Wednesday.