Freelance miners digging for raw jade stones in piles of waste rubble dumped by mechanical diggers, next to a jade mine in Hpakant, Myanmar's Kachin state on Oct. 15, 2015. (Photo by AFP)

Lawmakers and campaigners have welcomed the Myanmar government's decision not to renew mining licenses but they say more steps are needed to safeguard the environment and stricter regulations are required to reign in the multi-billion dollar jade industry.

New mining permits will only be issued by the government once new laws on gemstone mining have been passed, according to a report in the Myanmar Times.

Peter La Seng, a Catholic and National League for Democracy lawmaker for Hpakant township, welcomed the news and said it was the result of repeated calls by local communities to address poor regulations and environmental degradation.

"The government needs to have a strong commitment to reforming the jade industry by revising gemstone laws, enforcing rules that regulate the use of heavy machinery, and making sure contracts, taxes and revenues are transparent," said La Seng, an ethnic Kachin.

A total of 13 landslides have occurred around Hpakant since November 2015. More than 100 itinerant workers were buried while searching through mining waste on Nov. 11 and a landslide killed 13 workers on May 8.

For several years, itinerant workers have flooded into the area. In 2012 there were an estimated 20,000 workers and by 2015 the number had ballooned to 300,000, according to official figures.

Steven Tsa Ji, from the Kachin Development Networking Group — a civil society that monitors development projects and safeguards natural resources in Kachin State — hailed the move as "good news" because the jade industry has degraded the environment and people's lives.

But more needs to be done, he said.

"The government needs to set a policy that allows states to manage their own natural resources under federalism instead of being controlled by the central government," said Tsa Ji, adding that the government needed to support small-scale mining operations that benefit local communities.

Aung San Suu Kyi's government took office in April 2016 following a resounding victory in last November's election but the military, which ruled the country for more than 50 years, remain a strong political force. 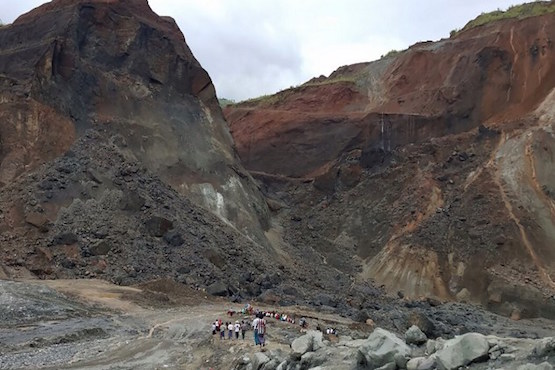 It is a daunting task for the new government to deal with the multi-billion dollar jade industry, as big firms with close ties to the military are involved.

Khin Mg Myint, an Upper House lawmaker for the ruling National League for Democracy party in Hpakant, said that the revenues from jade business in Kachin state don't benefit the people, only a handful of elites.

"We need to end large-scale mining operations and in the meantime we need to enforce systematic rules and regulations, proper dumping practices, proper use of heavy machinery in order to safeguard the environment," Khin Mg Myint told ucanews.com.

"For the sake of the local communities and the development of the country, all stakeholders need to collaborate and solve the issue," said Khin Mg Myint, adding that the government needs to scrutinize mining companies' income.

Myanmar produced US$31 billion worth of jade in 2014, a figure that would equate to 50 percent of the impoverished country's declared gross domestic product. Most of the precious stone ends up being sold on China's black market, according to a report by the nongovernmental organization, Global Witness.

As of last November, around 600 companies were engaged in a jade mining industry on 22,500 acres of land in Hpakant, according to the government. Global Witness said that they were mostly crony companies controlled by a network of military elites and drug lords.

Jade tariffs include a 20 percent value-based tax at mine sites and 10 percent on sales, but Global Witness estimates the state received less than US$374 million in official jade revenues in 2014, less than 2 percent of the US$31 billion estimated output value, according to Reuters.