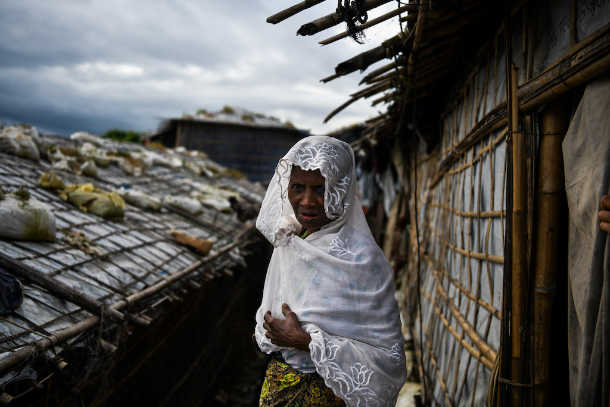 A Rohingya refugee stands outside her house at the Kutupalong camp in Ukhia near Cox's Bazar on Aug. 13. Nearly 700,000 Rohingya fled Myanmar's Rakhine State last year to escape a violent military crackdown. (Photo by Chandan Khanna/AFP)

United Nations human rights chief Michelle Bachelet has called for the establishment of an international mechanism to collect evidence of atrocities against ethnic minority Rohingya Muslims by Myanmar's military.

Bachelet, in a speech to the U.N. Human Rights Council on Sept. 10, said that doing so would complement and support a preliminary examination of the case against Myanmar by a prosecutor of the International Criminal Court (ICC).

"I urge the council to pass a resolution and refer the matter to the General Assembly for its endorsement so that such a mechanism can be established," Bachelet said.

Rohingya refugees have fled to Bangladesh since a Myanmar military crackdown in August 2017 following attacks on security personnel by Rohingya insurgents. There have been accounts of multiple killings, rapes and people being burned alive in their homes.

John Fisher, Geneva director of Human Rights Watch, said ultimately it was the Security Council's responsibility to refer Myanmar to the ICC and create a body to prepare case files for future trials.

On Sept. 7, Adama Dieng, the U.N. special adviser on the prevention of genocide, welcomed the decision by the ICC to prepare a preliminary case.

"The crimes allegedly committed or initiated in Myanmar against the Rohingya, particularly since August 2017, are horrific and must not go unpunished," Dieng said.

The failure, so far, of the U.N. Security Council to refer the matter to the ICC for investigation had been frustrating, he added.

On Sept. 6, the ICC ruled that it may exercise jurisdiction over the forced deportation of Rohingya by Myanmar's military as a possible crime against humanity.

The judges said the court may also exercise its jurisdiction in regard to persecution and/or other inhumane acts.

The ICC only has jurisdiction over crimes committed by states who are a party to the founding treaty — the Rome Statute, of which Myanmar is not a member.

Only the U.N. Security Council can refer matters to the ICC for further criminal investigation.

The ICC found that border crossings by fleeing refugees took place on the territory of a state party to the Rome Statute because Bangladesh is a member.

Myanmar has branded the court ruling as having "dubious legal merit" and maintains that it is under no obligation to respect it.

The court decision was the result of manifest bad faith, procedural irregularities and a general lack of transparency, Myanmar said in an official statement.