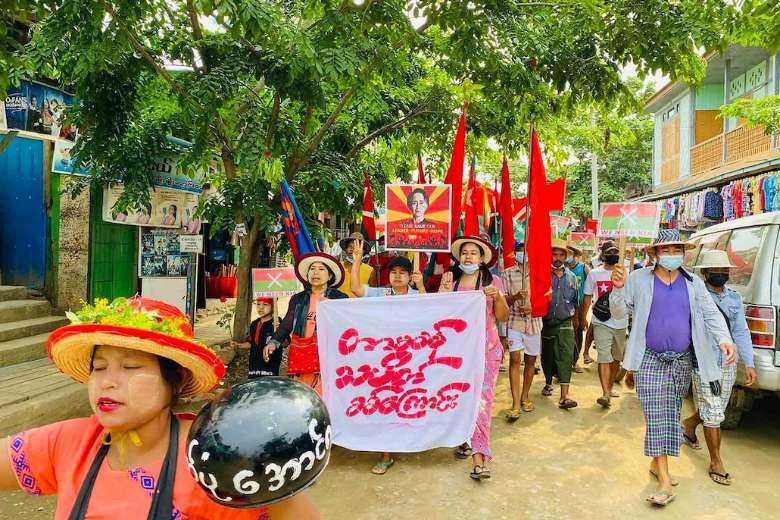 Protesters march during a demonstration against the military coup in Hpakant in Myanmar's Kachin state on May 5. (Photo: Kachinwaves/AFP)

Three pastors from Kachin state in northern Myanmar are facing three years in jail after being detained and charged for their leading role in organizing prayers for peace.

They were detained on June 28 after the chairman of the Rawang Literature and Culture Committee (RLCC) filed a lawsuit over them for leading a prayer service in Naungmoon township of Putao district on March 3, according to media reports.

The pastors, who belong to the Kachin Baptist Convention (KBC) and Rawang Baptist Convention, could face up to three years in prison under a penal code which criminalizes causing fear, spreading false news and agitating for criminal offenses against government employees.

The KBC has called for prayers for the immediate release of the pastors.

The pastors, who are in their 60s and not in good health, were sent to a prison in Naungmoon township on June 29 and a court hearing has been set for July 12, according to a Kachin-based media report.

Release the pastors immediately as they are not committing any wrongdoing. They were just leading prayers

Christians have expressed their anger over the case and prayed for the pastors’ release on social media.

“Release the pastors immediately as they are not committing any wrongdoing. They were just leading prayers,” one netizen said.

The military has raided churches, including Catholic and Baptist ones, in Kachin and Chin states, the Irrawaddy Delta, Yangon and Mandalay. Eight priests from Chin and Kachin states and Mandalay have been arrested.

At least eight churches and a Marian shrine in Kayah and neighboring Shan state were attacked by artillery shelling in May.

It is not uncommon in conflict-torn Myanmar for Christians to be targeted. A Catholic church in Shan state was bombed by military airstrikes in 2017 and another was attacked by the military in Kachin state in 2018.

Two Kachin pastors who spoke to the media about the church bombing in Shan state were jailed in October 2017 for two years under the Unlawful Association Act.

Areas occupied by the Kachin, Kayah, Chin and Karen ethnic groups, who have been facing oppression and persecution at the hands of the military for decades, are largely Christian.

Since February’s military coup, Christians have conducted prayers, held fasts for a peaceful solution and played a significant role in nationwide protests as well as supplying food and non-food items to the poor and displaced people.