Sister Theresa Kham of the Good Shepherd Sisters with Catholics who have recovered from drug addiction in a village in Myanmar's Shan State on April 27. (Photo supplied)

Sister Theresa Kham reaches out each month to Catholic villagers who have recovered from drug addiction in Myanmar’s Shan State.

She belongs to a chapter of the Good Shepherd Sisters congregation in Yangon Ywar, near Tachileik, where four nuns run a residential center set up in 2017 for girls and women at risk of being trafficked or in fear of physical abuse. They are taught vocational skills and school lessons.

Some 13 former drug addicts, who are all Catholics and range in age from 34 to 60, join the nun each month for meetings where they pray together, share experiences and listen to the word of God.

“I give input about the Bible and moral support so that they can live up to their life with Jesus,” Sister Kham told ucanews.com.

The nun also gives nutrition and medicine to the former drug addicts. Most had used heroin and joined Sister Kham’s program after they relapsed. Some have started taking drugs again but most avoid doing so.

In December, she took all her members to a convent for a Christmas gathering.

Her program is open to all people, whether young or old, who are recovering from drug addiction, but most young people have used yaba (crazy drug).

“Most of the young people are addicted to taking yaba pills, which are cheap and easy to get,” says Sister Kham.

Some young people approached her seeking advice about curing their addiction, so she sent them to a Baptist Church-run rehabilitation center.

The main ethnic groups in the region bordering Thailand are the Akha, Lahu, Shan and Bamar.  Among them are Buddhists, Baptists and Catholics. The Akha depend largely on traditional slash-and-burn agriculture. 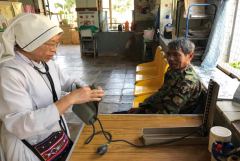 Former drug addict Louisa, 63, says they can share their experiences and learn from one another at the monthly meeting.

The Akha Catholic told ucanews.com that it is common for people in the region to use opium to recover from illness. “Since I recovered from it [opium addiction] in 2003, I have not used it again,” she says. Joseph, 34, is a new member of Sister Kham’s program after recovering from drug addiction just two months ago. He took yaba pills just for fun but became addicted.

“I decided to join the nun’s program after I give up the habit of drug usage as I can learn how to cope without taking drugs and gain strength from the Bible,” says the Akhar Catholic.

The father of five is determined not to use drugs again and work as a daily laborer to support his family. “I sometimes feel like taking drugs again and it’s a difficult thing to cope with,” he says.

Opium is valued in local culture, passed around at weddings and used as a painkiller.

Opium farming is rife in Myanmar, which remains the world’s second largest producer of the drug after Afghanistan.

Drug production in Shan State has had three main phases: opium and heroin from the 1950s to 1990s, followed by methamphetamine (yaba) and then highly addictive crystal meth since the early 2010s, according to an International Crisis Group (ICG) report in January.

ICG says Shan State has long been a center of conflict and illicit drug production, initially heroin, then methamphetamine tablets. Good infrastructure, proximity to precursor supplies from China and a safe haven provided by pro-government militias and in rebel-held enclaves have also made it a major global source of high purity crystal meth.

The order was introduced to Myanmar in 1866. It now has 51 nuns serving in five dioceses. They also run daycare centers for HIV-positive children and the children of parents living with HIV or drug addiction, and take care of street children.