Myanmar needs our prayers and robust action by world leaders

Cardinal Bo says the coup and ensuing crackdown have plunged Myanmar into 'yet another chapter of darkness, bloodshed and repression'
Published: March 15, 2021 03:56 AM GMT ▾ March 14 was the Global Day of Prayer for Myanmar — or Burma, as so many in the democracy movement and the ethnic nationalities still prefer.

This is an annual event initiated 25 years ago by David Eubank, an American evangelical missionary, human rights activist and humanitarian relief worker who founded and leads the Free Burma Rangers. In 1996, he met Aung San Suu Kyi in Yangon, and she told him that she reads the Bible regularly and that her favorite verse is John 8:3: “You will know the truth and the truth will set you free.” She asked him to pray for the country. A quarter of a century on, those words — and that call for prayer for Myanmar — have never been more needed.

Today, the international human rights organization CSW is hosting an online prayer event at which the speakers will be Myanmar’s Cardinal Charles Bo, British Catholic parliamentarian Lord Alton and his fellow legislator Baroness Cox, David Eubank and Dr. Sasa, the international envoy of the body of elected members of parliament in Myanmar, known as the Committee Representing Pyidaungsu Hluttaw (CRPH).

Pastor Roy Chan, founder of Hong Kong’s Good Neighbour North District Church, who assisted many of Hong Kong’s protesters in 2019, will also lead a prayer, illustrating the growing solidarity between the two movements.

In his powerful video message, Cardinal Bo says that the Feb. 1 coup and the ensuing crackdown have plunged Myanmar into “yet another chapter of darkness, bloodshed and repression.” A “decade of reform and opening,” albeit one which included “many challenges and storm clouds,” has been replaced by a return to “the nightmare of military repression, brutality, violence and dictatorship.”

Cardinal Bo praises “the amazing courage, commitment and creativity of our people, demonstrating throughout the country in their thousands for many days.”

He adds: “They have shown their determination not to allow their hard-won democracy and freedoms, their hopes of peace, to be stolen from them. It was a beautiful sight to see and a great inspiration. The sense of unity and solidarity in diversity — with people of different ethnicities and religions coming together for the same cause — was remarkable. But that was met with bullets, beatings, bloodshed and grief. So many have been killed or wounded in our streets, and so many thousands have been arrested and disappeared.”

And he draws attention to the increased attacks in the ethnic states, resulting in the displacement of thousands.

“Yet in these dark, dark times, we hear the voice of the Lord calling the Church still to be a witness, to be an instrument for justice, peace and reconciliation, to be his hands and feet in providing assistance to the poor and those in fear, to counter hatred with love,” says Cardinal Bo.

“We will pray and work for a new Myanmar to be born out of this current tragedy, a Myanmar where truly every human being has an equal stake in the country and equal rights to basic freedoms, a Myanmar where ethnic and religious diversity is celebrated and where we enjoy real peace, a Myanmar where the soldiers put down their guns, step back from power and do what an army is meant to do: defend rather than attack the people … A Myanmar that rises again from the ashes. How do we get there? By faith, prayer, love, dialogue and courage. By speaking out for truth, justice, freedom, peace and democracy.”

In his message, Lord Alton reflects on his visit to Myanmar with me eight years ago. He accompanied me as my sponsor into the Catholic Church, when I was baptized, confirmed and received by Cardinal Bo in Yangon’s St. Mary’s Cathedral on Palm Sunday 2013. He recalls witnessing “the very first fragile signs of the country’s apparent opening, democratization and, we hoped at the time, its blossoming.”

On that visit Lord Alton and I met Aung San Suu Kyi, while he addressed a gathering of civil society activists in Yangon organized by young National League for Democracy (NLD) campaigners but involving different religious, ethnic and multi-party groups.

“Cautious optimism was in the air,” Lord Alton recalls. “No one was delirious with unrealistic hope, but nevertheless there was a strong belief that this time was different — that the military, though it retained real power, was preparing to step back and allow a democratically elected civilian government, civil society, an independent media and ceasefires with the country’s ethnic armed groups to develop and to lead the country further down the path of democracy, freedom and peace. It really did seem that the nightmare of Myanmar’s decades-long struggle against tyranny was nearing an end and that a new dawn was breaking.”

Of course, neither of us was under any illusions about the challenges the country faced. Just before our visit, a shocking wave of anti-Muslim violence broke out, and we visited a Muslim community just outside Naypyidaw just a few days after it had been attacked.

“I saw the burned-out madrasa and heard the heartbreaking testimonies from the few villagers who had remained,” says Lord Alton. “They described how they had lived side by side with their Buddhist neighbors for decades and yet within minutes trust — and lives — were shattered. That deep-seated challenge of how to build a genuinely multi-ethnic, multi-religious diverse society in Myanmar, one in which every person of every ethnicity and religion has an equal stake in the country and in how it is governed, is the big challenge for Myanmar and for us all.”

Echoing Cardinal Bo’s message, Lord Alton says the coup last month “unravels whatever progress there has been” and sets the country back by more than a decade. “It puts Aung San Suu Kyi and her NLD colleagues right back where they started — in detention. It escalates the conflict with the ethnic groups — and already we are seeing more military attacks and the displacement of thousands more ethnic Karen people and others. And, with the military’s history of weaponizing religious and ethnic identity and divisions, it further fuels those seeds of religious intolerance and violence.”

These two messages from two prominent Catholic public figures should resound in the consciences of clergy and laity throughout the Church worldwide and among governments, parliamentarians and citizens everywhere if they care about human rights and democracy.

If the military is allowed to get away with its illegal coup and brutal crackdown, which the UN special rapporteur on human rights in Myanmar says may entail crimes against humanity, then that is not only a disaster for the people of Myanmar, who have already suffered so much for so long, it is also a green light to other potential tyrants considering usurping the constitution and seizing power.

As such, it represents a threat to the international rules-based order and peace and security throughout the region and the world. For all those reasons, Myanmar urgently needs our prayers — not just once a year but every day — and robust action by world leaders to stop the bloodshed and free the people.

Benedict Rogers is a human rights activist and writer. He is senior analyst for East Asia at the international human rights organization CSW, co-founder and chief executive of Hong Kong Watch, co-founder and deputy chair of the UK Conservative Party Human Rights Commission, a member of the advisory group of the Inter-Parliamentary Alliance on China (IPAC) and a member of the advisory group of the Stop Uyghur Genocide Campaign. He is the author of three books on Myanmar, including “Burma: A Nation at the Crossroads,” and has visited the country and its borders more than 50 times. The views expressed in this article are those of the author and do not necessarily reflect the official editorial position of UCA News. 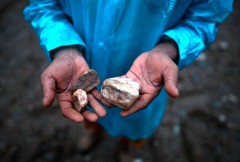