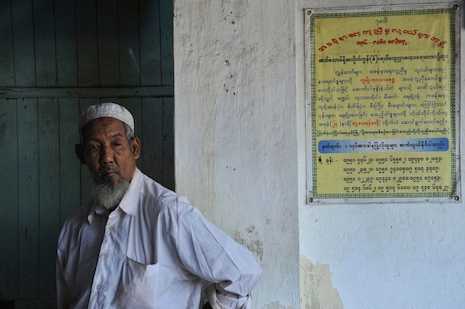 Fresh anti-Muslim attacks broke out in the southern town of Okhan in Yangon division on Tuesday in the latest sign that religious violence is spreading in this predominantly Buddhist country.

Muslim residents say a mob of about 500 Buddhists destroyed a mosque, a madrassa (Islamic school) and Muslim shops and homes, prompting families to flee.

“[There are] no police nearby. We are so afraid for our lives,” said Tin Tun Oo, a Muslim resident who went into hiding on Tuesday afternoon with his family.

Government spokesman Ye Htut said on his Facebook page that attacks had started after a Buddhist monk “dropped his alms bowl after being pushed by a Muslim woman in the market.”

An argument then quickly escalated into a full-blown riot by midday, according to witnesses in Bago.

Security forces fired shots to disperse the crowd and the situation was under control by three o’clock in the afternoon local time, said Ye Htut.

“Security forces have been dispatched to the area,” he added.

Wunna Shwe, co-secretary-general of Myanmar’s Islam Council, said he contacted senior members of the government urging a swift response by the authorities.

Tuesday’s violence marks the latest test for the security forces which have been heavily criticized over inaction during similar riots in Meikhtila to the north which left at least 43 people dead in March.

On Monday, a government-appointed commission investigating Buddhist-Muslim clashes in western Rakhine state last year issued controversial recommendations to deal with sectarian rioting including family planning for minority Muslim Rohingyas, a group it referred to consistently in the report as “Bengalis.”

Much of Buddhist Myanmar – including the government – considers Rohingyas to be illegal immigrants from Bangladesh but ill-feeling has spread, targeting other Muslim groups.

Last week, Human Rights Watch accused Myanmar's security forces of being complicit in what it termed ethnic cleansing against Muslims in Rakhine.