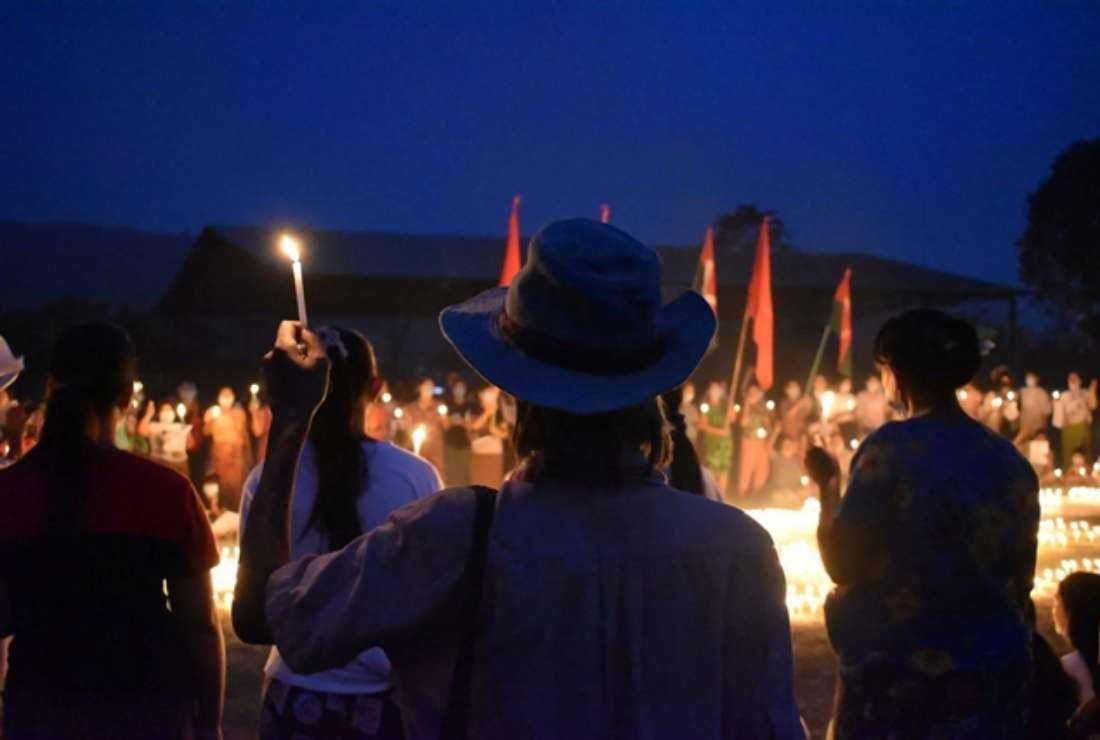 People taking part in a candlelight protest during a demonstration against the military coup in Hpakant township in Myanmar's northern Kachin state. At least 80 people were killed at a concert in A Nang Pa, a village in Hpaknat township, when it was attacked by three fighter jets on Oct 23. (Photo: AFP/ Kachin Waves)

People from all walks of life in Myanmar are mourning the death of scores of people killed in the junta’s aerial bombing of a concert in Christian-majority Kachin state.

At least 80 people including leading Kachin musicians were killed at the concert in A Nang Pa, a village in Hpaknat township, when it was attacked by three fighter jets on Oct 23, according to media reports.

The tragedy in northern Kachin state prompted many people to "black out their profile photo on Facebook to show sorrow for the victims and solidarity with ethnic Kachin people.

A group of Christians held a prayer service in Majayang town, Kachin state, which is under the control of the KIA, on Oct. 25.

Some Buddhist groups in the country also prayed for the victims by lighting candles during protests against military rule.

"We are losing too many innocent lives"

The Independent Catholics for Justice in Myanmar (ICJM) group said it was deeply saddened by the tragedy and prayed for the victims and families of the deceased.

“We condemn this inhuman act by the military junta which will set back any effort to achieve peace in the country,” the ICJM said.

Dr. Sasa, an ethnic Chin Christian and spokesman for the opposition National Unity Government (NUG), said his thoughts and prayers were with the victims and he offered his condolences to the victims’ families.

“With the indifference and inaction of the international community thus far we are losing too many innocent lives,” said Dr. Sasa, who uses only one name.

“We need immediate tangible action and support from the international community to hold the junta accountable for their crimes,” he added.

The latest incident was the deadliest air attack in the conflict-torn nation where the military junta has used air strikes and heavy artillery against civilians in several regions including in Christian-majority areas of Kachin, Kayah, Karen and Chin states since seizing power in a coup on Feb.1, 2021.

Churches and homes have been set ablaze, priests have been targeted and hundreds of people have been killed or are missing.

The NUG said the junta had launched 240 air strikes against civilians and killed more than 200 people, excluding the tragedy in Kachin state, since the coup.

“We are deeply saddened by the growing casualties and the immense suffering that ordinary people in Myanmar have endured,” the chair of the Association of Southeast Asian Nations said, in response to the attack.

“We, therefore, strongly urge the utmost restraint and an immediate cessation of violence and call for all parties to pursue dialogue.”

Kachin state has been gripped by sporadic fighting between the military and the KIA for decades since Myanmar gained independence from Britain in 1948.