An elderly Rohingya refugee rests after crossing into Bangladesh from Myanmar at Shah Porir Dwip Island near Teknaf in October 2017. About 740,000 Rohingya fled Myanmar after a brutal military clampdown. (Photo: Tauseef Mustafa/AFP)

A government-established Myanmar inquiry has ruled that there were war crimes and serious human rights violations against Rohingya in a 2017 crackdown in Rakhine state but found no genocidal intent.

“Although these serious crimes and violations were committed by multiple actors, there are reasonable grounds to believe that members of Myanmar’s security forces were involved in war crimes, serious human rights violations and violations of domestic law in 2017,” the commission said in statement

“There is insufficient evidence to argue, much less conclude, that the crimes committed were undertaken with the intent to destroy, in whole or in part, a national, ethnic, racial or religious group or with any other requisite mental state for the international crime of genocide.”

But the commission admitted that “the killing of innocent villagers and destruction of their homes were committed by some members of Myanmar’s security forces through disproportionate use of force during the internal armed conflict.” 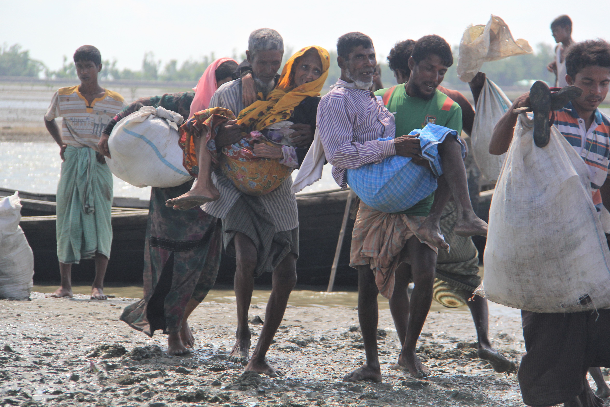 The commission’s full report has yet to be made public and it remains unclear whether the government will do so.

Military operations from August 2017 forced about 740,000 Rohingya to flee over the border into refugee camps in Bangladesh.

Myanmar has always maintained the crackdown was needed to root out Rohingya rebels after a series of attacks left a dozen security personnel dead.

But refugees have given graphic accounts of widespread murder, rape, torture and arson and have so far largely refused to return to Myanmar for fear of their safety.

Myanmar set up the commission with two international and two local members in July 2018.

Its report comes just days before the United Nations’ top court’s ruling on Jan. 23 on a lawsuit by The Gambia accusing Myanmar's military of genocide against Rohingya in Rakhine.

Suu Kyi told an initial hearing of the International Court of Justice (ICJ) in the Netherlands in December that no genocide had occurred in Myanmar.

A UN fact-finding mission has reported that “genocidal acts” were carried out in Rakhine by Myanmar’s military in 2017.

Phil Robertson, deputy Asia director at Human Rights Watch, slammed the panel’s statement as “a politically skewed set” of commissioners working closely with the Myanmar government from a non-transparent investigation.

“The ICOE seems willing to blame individual soldiers for abuses but not the commanders who the UN and other investigations have found were responsible for the numerous systematic atrocities against the Rohingya,” Robertson said in a Jan. 20 statement.

He added that Myanmar should immediately release the full ICOE report in both Burmese and English so that the global community can read for itself how the commission did its work, what it found and how it reached its conclusions.

Aye Lwin, a Muslim leader and a former member of the late Kofi Annan’s Rakhine Advisory Commission, said revealing serious human rights violations seems a positive development but it is important for the military and the government to implement the commission’s findings and take action against perpetrators.

“To be fair, it may be appropriate to use the word ‘genocide’ only after the international court rules on whether it was genocide or not,” Aye Lwin told UCA News.

He said it is unfortunate to see a narrative among people and the media that Rohingya are illegal immigrants who should return to Bangladesh.

Myanmar’s government and most people regard Rohingya as Bengalis. By not recognizing the term “Rohingya,” the government has implied that they are illegal immigrants from neighboring Bangladesh despite vast numbers of them having lived in Myanmar for decades.

Kyaw Min, chairman of the Yangon-based Democracy and Human Rights Party, which works for Rohingya rights, said the commission’s findings appear to reflect the government’s stance, so it raised the question of credibility among the international community.

“I think the government-established commission’s report will not impact this week’s ruling by the ICJ, which has its own investigations,” Kyaw Min told UCA News.