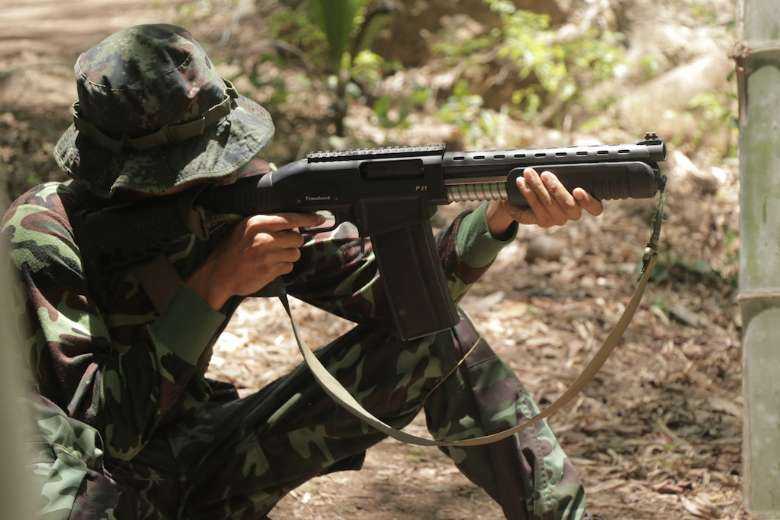 An undated photo taken this month shows an anti-coup activist undergoing basic military training at a camp of the Karen National Union, an ethnic rebel group in Karen state, after people fled major Myanmar cities due to the military crackdown following the Feb. 1 coup. (Photo: AFP)

A priest from Banmaw Diocese in Myanmar’s Kachin state who was arrested by the military has been released after church leaders appealed to authorities.

Father Columban Labang Lar Di was traveling from Banmaw to Myitkyina on May 13 when soldiers checked his identity card and mobile phone and then detained him in military quarters for questioning.

Military and local authorities returned him to the diocesan center around 11am on May.17.

His release came after Bishop Raymond Sumlut Gam of Banmaw submitted a letter to military officials with a detailed explanation of the priest’s trip for pastoral duties.

The bishop said the priest was treated well during his four days of detention and was asked for details of documents and photos found in his mobile phone.

As there were documents on Bible courses in the Kachin language and photos of internally displaced persons (IDPs) and church activities, the military asked him about those activities.

“He is back in safety with a normal situation and there are no signs of any ill-treatment,” Bishop Gam told UCA News.

The priest has served as an assistant parish priest in Laiza, the headquarters of the Kachin Independence Army (KIA), so he had some photos with KIA soldiers while he was doing social development activities.

He has also served as youth director of Banmaw Diocese and an assistant parish priest in Banmaw.

The priest’s arrest comes as fighting has intensified between the military and the KIA in several townships in Kachin state that has displaced over 5,000 people since March. The Church has provided humanitarian aid to IDPs who have taken refuge in churches and monasteries.

An IDP camp housing more than 3,000 people is in Father Lar Di’s parish.

Bishop Gam said he celebrated a Mass on Ascension Sunday (May 16) in St. Michael’s Church in Nan Hlaing Parish, where over 300 people from 64 families have taken refuge from recent fighting.

“There is an old building which was used as a boarding school for girls in the church compound. We have used it as a shelter for new IDPs,” said Bishop Gam, who met with IDPs after the Mass.

More than 100,000 people remain at IDP camps in Kachin and Shan states due to conflict since June 2011.