Myanmar’s military has set up a panel to investigate atrocities committed against the Rohingya during a crackdown against the Muslim minority that began in August 2017.

A panel comprised of three major-generals and colonels will investigate events in Myanmar’s Rakhine State in August 2017 which resulted in more than 700,000 of the Muslim minority fleeing to Bangladesh.

“The information is released that the investigation court was formed with the following persons to further scrutinize and confirm the respective incidents,” said a statement posted on military chief Min Aung Hlaing’s website on March 18.

The statement said the court will look into reports of accusations that were compiled by Amnesty International, Human Rights Watch and a U.N. fact-finding mission.

The U.N. mission’s report found that Myanmar's military committed four of the five acts constituting genocide against the Rohingya. It said military chief Min Aung Hlaing and five other senior generals must be prosecuted for genocide and war crimes against humanity.

A previous investigation carried out by the military in 2017 found that no human rights violations were committed by its security forces during its clearance operation in August 2017.

The move comes when Aung San Suu Kyi’s government and the military has been facing pressure from the international community over atrocities in Rakhine State.

Phil Robertson, deputy Asia director of Human Rights Watch, said it shows the Myanmar’s military see pressure intensifying to hold them accountable for the crimes against humanity and ethnic cleansing they committed in Rakhine in 2017.

“Creating this new committee is just another bogus game to buy more time from the U.N. and the international community by pretending that there is an ongoing investigation being conducted,” Robertson said. 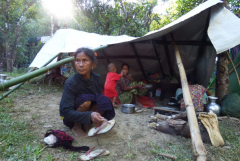 He added that the sole reason for the existence of this Myanmar military committee is “to help bolster Myanmar’s cover-up of atrocities” in Rakhine.

A Rohingya from Maungdaw township, Rakhine State, said he doubted the credibility of the military panel over rights abuses committed by its own soldiers.

“The move is just a show for the international community and we don’t have high expectations over concrete results,” the Rohingya resident told ucanews.com.

Yanghee Lee, the U.N.’s special rapporteur on human rights in Myanmar, has appealed for the crisis to be referred to the International Criminal Court (ICC) by the U.N. Security Council. “Victims must not be forced to wait in the purgatory of international inaction,” she said.

ICC officials visited Bangladesh from March 6-11 and said “independent and impartial preliminary examination” of the situation in Bangladesh and Myanmar is ongoing and will follow its course.

The ICC only has jurisdiction over crimes committed by states who are a part of the Rome Statute, of which Myanmar is not a member. Only the Security Council can refer the situation to the ICC for further criminal investigation.

However, judges last year ruled that the court still has jurisdiction over crimes against the Rohingya because Bangladesh is a member of the court.