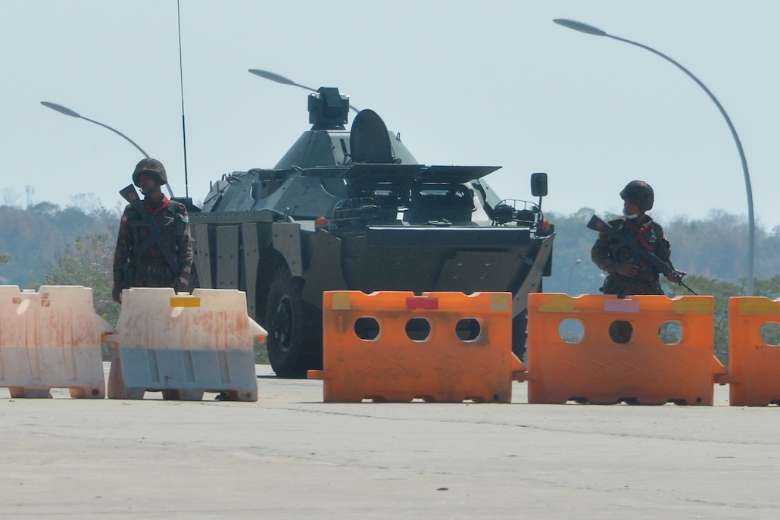 Soldiers stand guard on a blockaded road to Myanmar's parliament in Naypyidaw on Feb. 1 after the military detained the country's de facto leader Aung San Suu Kyi and the president in a coup. (Photo: AFP)

Thirteen years after setting Myanmar on a course for democracy and only three months after November’s general election, the country’s military has reversed course by executing a coup d’etat.

Dozens of government leaders including President Win Mynt, State Counselor Aung San Suu Kyi, the chief ministers of all seven states and seven regions, parliamentarians, human rights activists and student leaders were detained in early-morning raids on Feb. 1 as military leader General Min Aung Hlaing assumed control of the country after instituting a state of emergency for one year.

“The actions of the military are actions to put the country back under a dictatorship,” the National League for Democracy (NLD) said in a statement which carried leader Suu Kyi’s name. “I urge people not to accept this, to respond and wholeheartedly to protest against the coup by the military.”

Telephone, television and internet networks were shuttered across Myanmar as soldiers took to the streets in capital Naypyitaw, commercial hub Yangon and other major centers.

“The arrest of Aung San Suu Kyi, senior officials and other political figures is extremely alarming. Unless those detained can be charged with a recognizable criminal offense under international law, they must be immediately released,” Amnesty International deputy regional director Ming Yu Hah said in a statement.

“The Myanmar military must clarify on what legal basis they have been detained. They must also guarantee that the rights of those arrested are fully respected, including against ill-treatment, and that they have access to lawyers of their own choice and to their family. They must confirm their whereabouts and grant them access to medical care.

“This is an ominous moment for people in Myanmar and threatens a severe worsening of military repression and impunity. The concurrent arrests of prominent political activists and human rights defenders sends a chilling message that the military authorities will not tolerate any dissent amid today’s unfolding events.”

The military had taken a leaf from former US president Donald Trump’s playbook by disputing the process and results of the Nov. 8 election, claiming 8.6 million cases of voter fraud.

“I didn’t expect it to happen,” Christopher Lamb, a former Australian ambassador to Myanmar, told UCA New. “My main thought is that there was a big question about what would happen to Min Aung Hlaing. There is probably more personality than structure to this event, and I still think that is a central part to the story.”

Deakin University associate professor and Myanmar expert Antony Ware said: “I think it’s come down to doing what the military said they would do — protect the nation. They alleged all sorts of fraud during the election and requested postponing the lower house election. In their own minds, they believe they are protecting the nation and acted according to the law under the constitution that gives them power to do it. We shouldn’t be surprised, but they really will be thinking that.”

While China has yet to make any official comment on the coup, Ware believes that China’s implicit backing is something of a trump card for the military.

“If the US puts sanctions on them, it doesn’t make much difference. They will simply turn more to China,” he said.

He predicted that “in a year’s time, you will see an election — with gerrymandering — or they come up with another excuse like writing a new constitution,” he said.

The one miscalculation on the table is the potential for ethnic disputes. “But the military have the weapons – they have been fairly restrained but have the firepower to do that. Instead of a peace process, we may see the military trying to win these wars over the next 12 months,” Ware said.

He noted that the biggest potential problem is in Rakhine state, home of both the displaced Rohingya people and anti-Naypyitaw Buddhists, where the ethnic military Arakan Army has been building in numbers and has proved adept at surprise attacks and kidnapping.

“The Arakan Army will relaunch pretty quickly, repatriation of the Rohingya will be off the table, this will fracture and put pressure on the remaining 500,000 Rohingya. The fear quotient will remain,” Ware said.

International condemnation of the coup was widespread.

US Secretary of State Antony Blinken called on Myanmar’s military leaders to release all government officials and civil society leaders and “respect the will of the people of Burma as expressed in democratic elections.”