Beijing part of the problem when it comes to demanding accountability for human rights atrocities, says HRW deputy director 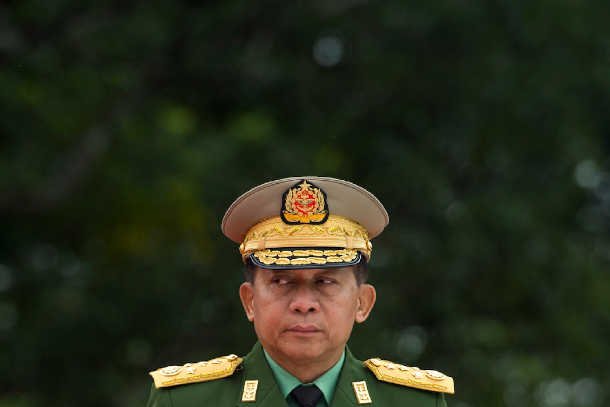 The commander-in-chief of Myanmar’s military has praised China for supporting anti-Rohingya operations in Rakhine State and for standing up against the international community.

Snr. Gen. Min Aung Hlaing thanked the Chinese government for supporting its military measures against Rohingya Muslims during a meeting with members of China’s Central Military Commission and Joint Staff Department chief in Beijing on April 10.

“Myanmar is thankful to China as a good neighbor for its correct stance and standing against the international community over the Rakhine State issue,” Min Aung Hlaing said, according to a press release.

“Myanmar regards China as an eternal friend and a strategic partner country.”

More than 700,000 Rohingya have fled to Bangladesh from Rakhine State due to a bloody crackdown by the Myanmar military that started in August 2017 following border post attacks by Rohingya militants.

Aung San Suu Kyi’s government and the Tatmadaw (Myanmar military) have been facing pressure from the international community over atrocities committed against the Rohingya in the state.

A U.N. fact-finding mission found that Myanmar's military committed four of the five acts constituting genocide against the Rohingya. It said military chief Min Aung Hlaing and five other senior generals should be prosecuted for genocide and crimes against humanity.

The Tatmadaw has denied it committed atrocities while insisting its clearance operations were justified to root out Rohingya militants.

Beijing has shielded Myanmar from international pressure and any punitive actions from the U.N.

“China is part of the problem when it comes to demanding international accountability for human rights atrocities since they are committing their own against Uyghurs in Xinjiang and are happy to help other nations like Myanmar get away with similar sorts of crimes,” Robertson told ucanews.com.

During a meeting with Chinese President Xi Jinping on April 10, Min Aung Hlaing spoke of the Myanmar military’s support for China’s Belt and Road Initiative (BRI).

“[The] BRI includes several projects benefiting Myanmar, so the Tatmadaw will cooperate,” he said.

“Sadly, it appears that the military chief and Suu Kyi are in a competition for Chinese support,” HRW’s Robertson said. “It will be the people of Myanmar who pay the price in lost rights, land seizures and disastrous dam projects.”

Suu Kyi’s government is facing renewed pressure from Beijing to restart the stalled Myitsone Dam project in Kachin State. The China-backed megaproject is hugely unpopular among the Myanmar public because of social and environmental concerns.

Wanting stability on its shared borders, the Chinese government is also pushing the Myanmar government, military and armed groups to cease fighting.

Myanmar's military announced a partial ceasefire in northern areas from Dec. 21 to April 30 in a move that observers see as the result of Chinese pressure.

Stability allows for Chinese investments into Myanmar to proceed, including strategic infrastructure projects under the BRI and the China-Myanmar Economic Corridor, observers point put.