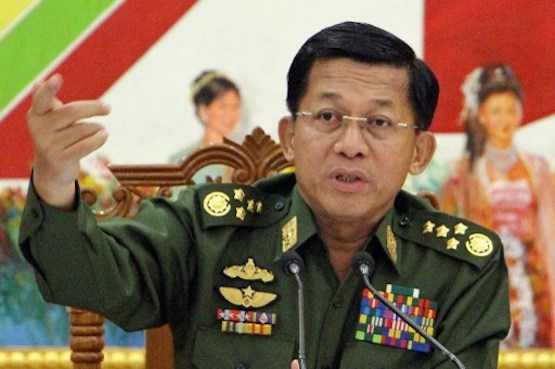 Myanmar's army chief, General Min Aung Hlaing, addresses a press conference in Naypyidaw. Often described as the most powerful man in Myanmar, the general defended a recent crackdown on Rohingya Muslims in which more than 1,000 people are thought to have died. (Photo by Hla Hla Htay/AFP)

Myanmar's military chief has called Rohingya Muslims illegal immigrants and defended a recent crackdown on the minority group in the northern part of Rakhine State that led to the deaths of an estimated 1,000 people and the exodus of more than 77,000 Rohingya.

"We have already let the world know that we don't have Rohingya in our country," Senior General Min Aung Hlaing, commander-in-chief of the country's defense forces said, according to Reuters.

"The Bengalis in Rakhine State are not Myanmar citizens and they are just people who come and stay in the country," he said, using a derogatory term for the Rohingya and repeating a view that, although not fact-based, is widely shared in his country.

"We have a duty to protect our sovereignty when it is harmed by political, religious and racial problems in the country," he told a gathering in the capital Naypyidaw to celebrate Armed Forces Day.

Colonial records from Britain, which once ruled Myanmar, show Rohingya living in the region for hundreds of years.

Communal violence with ethnic Rakhine Buddhists in 2012 left more than 200 people dead and displaced about 140,000 Rohingya.

Myanmar has said it will not cooperate with the U.N. mission.