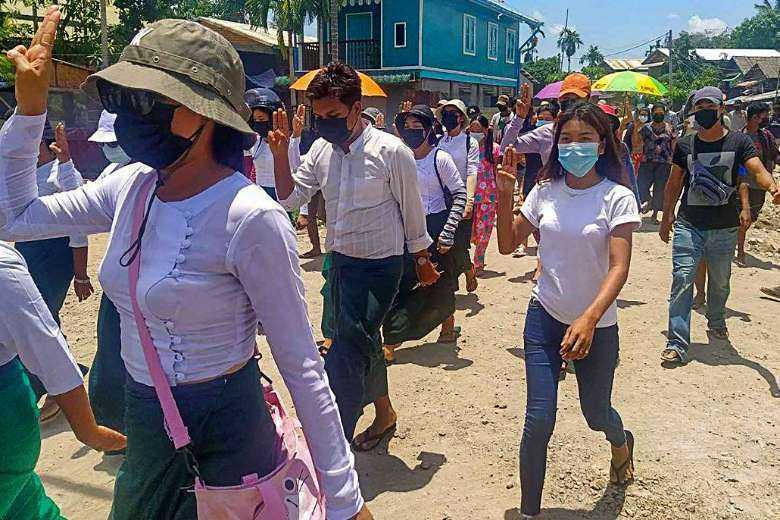 Protesters make the three-finger salute during a demonstration against the military coup in Dawei on May 16. (Photo: Dawei Watch/AFP)

A priest from Banmaw Diocese in Myanmar’s Kachin state was arrested by security forces while he was traveling between towns.

As Father Columban Labang Lar Di was traveling from Banmaw to Myitkyina on May 13, soldiers checked his identity card and mobile phone and then detained him in military quarters as they needed to ask more questions, according to church officials.

They said the priest needed to make a day trip between Banmaw and Myitkyina and left early in the morning when not many people were on the road.

The priest’s mobile phone might contain photos of internally displaced persons as there is an IDP camp in his parish.

The priest was arrested in Momauk township where the military and the Kachin Independence Army (KIA) have been engaged in intense fighting since late April, with the military deploying fighter planes and heavy artillery.

A senior cleric from Banmaw Diocese said it appears that security forces wanted to know more details so they detained him.

“We are communicating with the military to appeal to them that he is a priest and he was going on a pastoral duty. We hope he will be released soon,” the cleric told UCA News.

Catholics in Kachin and elsewhere in Myanmar have spoken out about the arrest of the priest on social media. One said “May he be released as soon as possible” while another said “May God protect him.”

In April, the military raided churches in Kachin state and at least five Catholic churches in Pathein Diocese in the Irrawaddy Delta.

The priest’s arrest comes as fighting has been intensifying between the military and the KIA in several townships in Kachin state since March that has displaced over 5,000 people. The Church has provided humanitarian aid to IDPs who have taken refuge in churches and monasteries.

More than 100,000 people remain at IDP camps in Kachin and Shan states due to renewed conflict since June 2011.

Kachin and Karen guerrillas who support anti-coup protests have been engaged in intense conflict with the military since March.

While the military has been battling in Kachin and Karen regions, its bloody crackdown on pro-democracy protesters shows no signs of abating as the death toll has risen to almost 800.