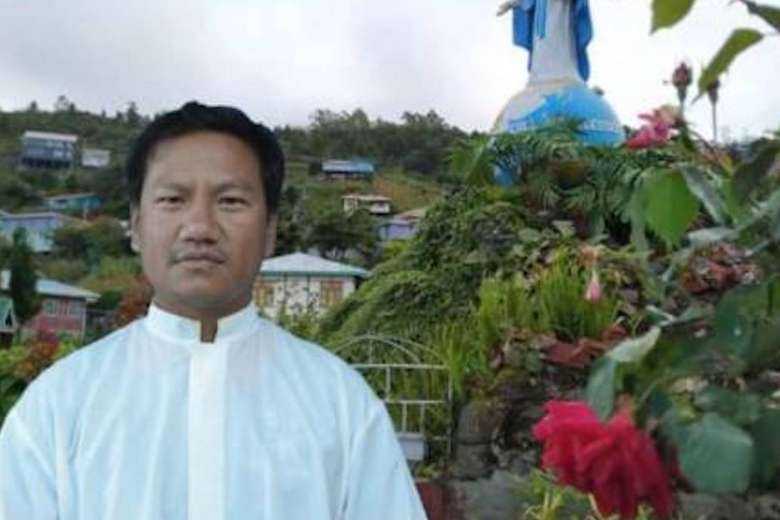 Myanmar’s military raided a Catholic parish house in Chin state and arrested a priest suspected of providing food to a civil resistance group.

Soldiers arrested Father Michael Aung Ling and one boarding student at the parish compound of St. Michael’s Church in Kanpetlet town. The parish is under Hakha Diocese.

After finding rice bags stored in the parish house, soldiers suspected the priest had supplied food to the Chinland Defense Force (CDF).

Father Aung Ling was arrested around 8am on June 16 and questioned for 11 hours before being returned to his parish house around 7pm after signing a commitment letter.

The CDF is one of several independent civil resistance groups fighting the military after it seized power on Feb. 1 in a coup to overthrow the elected government. The groups are using homemade rifles and arms.

A CDF ambush caused heavy casualties among the junta’s forces in a conflict that erupted in Chin state in early May.

Some informants appear to have given the wrong information to the military that led to the arrest of Father Aung Ling, according to church officials in Chin state.

Kanpetlet is 48 kilometers from Mindat town, where the military imposed martial law on May 13 following intense fighting with the CDF that led to nearly 50,000 people fleeing into jungles.

Kanpetlet is among several townships including Mindat and Hakha where more than 18,000 displaced people are sheltering in 74 centers.

The priest’s arrest came three days after six priests from Mandalay Archdiocese were arrested and released on June 13.

Soldiers also arrested a priest from Banmaw Diocese in Kachin state while he was traveling from Banmaw to Myitkyina on May 13. He was released after four days in a military compound in Banmaw after Bishop Raymond Sumlut Gam intervened.

The military also raided churches in Kachin state and at least five Catholic churches in Pathein Diocese in the Irrawaddy Delta in April.