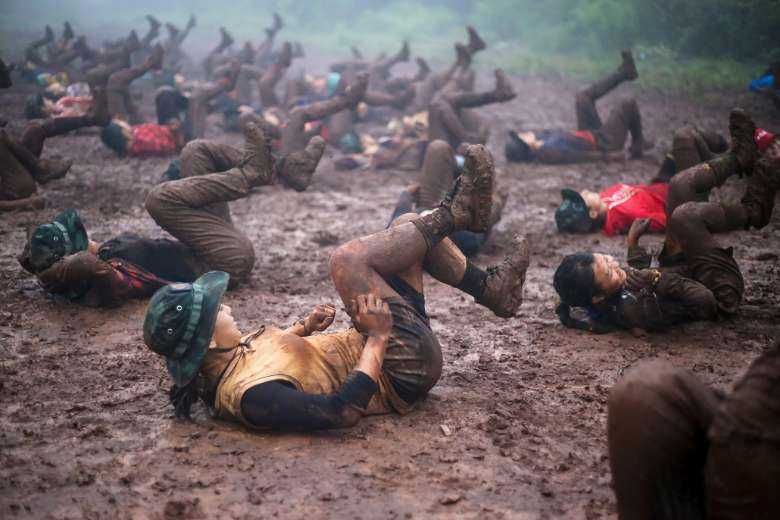 Karenni Nationalities Defense Force (KNDF) female members take part in a training session at their base camp in a forest near Demoso in Myanmar's Kayah state on May 24. (Photo: KNDF/AFP)

The report, “Bullets rained from the sky: War crimes and displacement in eastern Myanmar," released on June 1, found Myanmar’s military had subjected Karen and Kayah civilians to collective punishment via widespread aerial and ground attacks, arbitrary detentions that often resulted in torture or extrajudicial executions, and the systematic looting and burning of villages.

It said the violence in Kayin and Kayah states had reignited in the wake of last year’s military coup and escalated from December 2021 to March 2022, killing hundreds of civilians and displacing more than 150,000.

Some attacks appear to have directly targeted civilians as a form of “collective punishment against those perceived to support an armed group or the wider post-coup uprising.”

The rights group documented 24 attacks by artillery or mortar fire between December 2021 and March 2022 that killed or injured civilians or that caused destruction to civilian homes, schools, health facilities, churches and monasteries.

At least 10 churches including eight Catholic ones have been destroyed by artillery shelling or airstrikes between May 2021 and March 2022.

"The military’s ongoing assault on civilians in eastern Myanmar has been widespread and systematic, likely amounting to crimes against humanity"

One airstrike last January hit a camp for internally displaced persons in Kayah state, killing a man and two sisters who had taken refuge in the area.

Some 35 civilians including women, children and two aid workers from Save the Children were killed by troops and their bodies set on fire on Dec. 24, 2021.

“The world’s attention may have moved away from Myanmar since last year’s coup, but civilians continue to pay a high price. The military’s ongoing assault on civilians in eastern Myanmar has been widespread and systematic, likely amounting to crimes against humanity,” said Raway Rageh, senior crisis adviser at Amnesty International.

Villages were burned, some of them multiple times, in parts of Kayah state and the burning directly tracked military operations from village to village in February and March, according to analysis of fire data and satellite imagery.

Kayah and Kayin states in eastern Myanmar have witnessed the junta’s attacks with airstrikes and heavy weaponry that led to thousands of people fleeing from their homes into the jungle or churches.

Kayah state, a remote and mountainous region, is regarded as a stronghold of Catholicism in the Buddhist-majority country

The military also faces strong resistance from newly emerged people’s defense forces which have teamed up with established armed groups in Kayah and Kayin states.

Two-thirds of the state’s population was displaced after fighting between the military and rebel forces erupted in May 2021.

At least 150,000 people from Karen state have been displaced internally due to the fighting erupting in March 2021.

The Karen account for about 5 million of Myanmar’s 54 million people and are the third-largest ethnic group after the Bamar and Shan. The majority of Karen, also known as Kayin, are Theravada Buddhists while around 15 percent are Christians. Many were animists when Christian missionaries arrived in the 19th century.