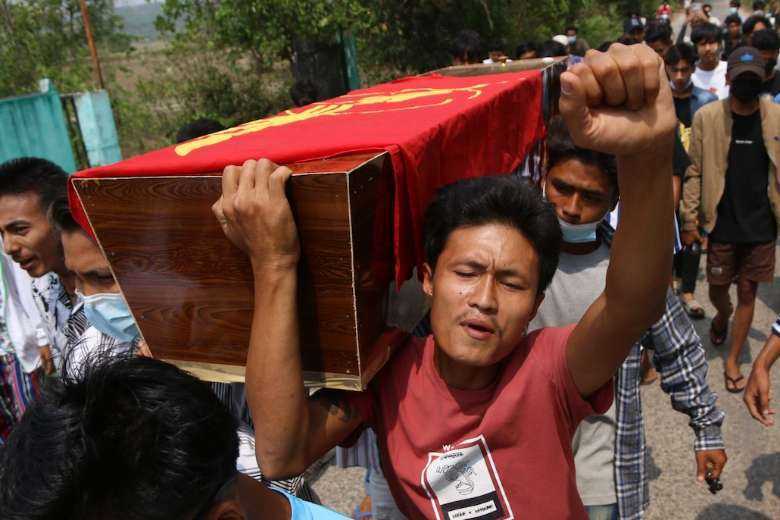 Mourners carry the coffin of Kyaw Min Latt after he was shot by security forces while riding his motorcycle on March 27, 2021. At least 140 civilians were killed on the same day. (Photo: AFP/Dawei Watch)

The junta has murdered, imprisoned, tortured, disappeared, forcibly displaced and persecuted civilians in acts that amount to crimes against humanity, according to a report by Fortify Rights and the Schell Center for International Human Rights at Yale Law School.

The report released on March 24 said 61 senior military and police officials should be investigated and possibly prosecuted for international crimes.

The 193-page report is based on more than 120 testimonies, leaked documents and information, and in-depth legal analysis of new evidence. It focused on the first six months after the military’s coup on Feb. 1, 2021.

The report revealed how the military used snipers and live ammunition against civilians and how the junta engaged in a premeditated, widespread and systematic attack on the civilian population in cities and towns.

It also provided the junta’s chain of command during the crackdown, including Min Aung Hlaing’s establishment of a Special Command in Naypyitaw, the remote capital.

“The actions of the military junta of Myanmar should be called what they truly are: crimes against humanity”

At least 140 people were killed on March 27 last year, a day after state television had given a warning to the protesters. “You should learn from the tragedy of earlier ugly deaths that you can be in danger of getting shot in the head and back.”

The report obtained a field craft manual for the military that commands soldiers to make sure a bullet equates to an enemy killed and also received leaked documents that instructed forces to commit crimes.

“All individuals responsible for these crimes should be sanctioned and prosecuted,” said Matthew Smith, chief executive officer at Fortify Rights and co-author of the report.

The report came a week after the UN High Commissioner for Human Rights’ report on the Myanmar military committing systematic human rights violations, some of which may amount to war crimes and crimes against humanity.

“The actions of the military junta of Myanmar should be called what they truly are: crimes against humanity,” Tom Andrews, special rapporteur on human rights in Myanmar, said at the launch of the report.

The report also called on the UN to impose a global arms embargo on the Myanmar military and governments to engage with the National Unity Government established by ousted MPs, activists and ethnic groups.

At least 1,600 people have been killed by security forces and more than 12,500 people detained over the past 13 months, according to the UN.