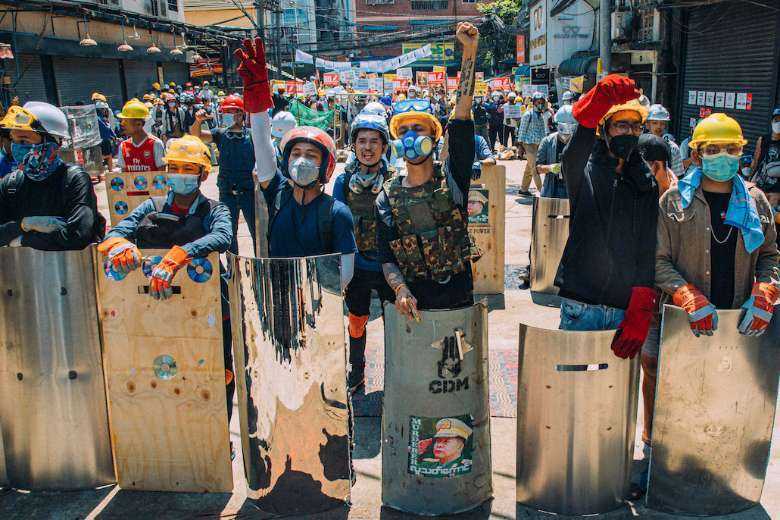 Myanmar is on a watchlist of countries that have seen a recent and rapid decline in fundamental democratic freedoms.

More than four months since the Feb. 1 military coup, the assault on civic space has persisted with the arrest and detention of activists and protesters, use of excessive force and firearms against protesters and disruption to the internet.

The watchlist was released on June 23 by the CIVICUS Monitor, an online platform that tracks the latest developments to civic freedoms across 196 countries.

Since February, thousands have been arbitrarily arrested, detained and attacked including human rights defenders, trade unionists, journalists, political and student activists, poets, writers and monks. Many are facing baseless charges including treason, which is punishable by up to 20 years in prison, or incitement. There have also been reports of torture and ill-treatment during interrogation, and of deaths in custody.

“We are extremely concerned about the arbitrary detention and attacks on human rights activists and other protesters following the coup. Many have been denied access to lawyers and are facing trumped-up charges. The international community must do more to push for their release and support and protect activists who are at risk of arrest and ill-treatment,” said Josef Benedict of CIVICUS.

Mass protests and strikes have been taking place across Myanmar by the civil disobedience movement. To avoid arrest, protests have become progressively more creative.

The military has been using extremely brutal methods. Shooting people in the head, arresting and torturing protesters

In response, security forces intensified their crackdown on protests using violent crowd dispersal techniques including assault rifles, light machine guns, sniper rifles and live grenades. Large numbers of battle-hardened troops have been deployed in towns and cities to quell the protests. The junta has also deployed airstrikes or shelling in several regions.

“The military has been using extremely brutal methods. Shooting people in the head, arresting and torturing protesters. They believe if they do such things, people will be silent. However, the civil disobedience movement is continuing to mobilize and people are showing dissatisfaction in different ways and refusing to cooperate with the military,” said Bo Kyi, co-founder of the Assistance Association of Political Prisoners.

Journalists are also being hunted down and targeted by the military. As of May 21, some 88 journalists have been arrested, mostly detained during newsroom raids or while covering anti-coup street protests.

Internet shutdowns have now reached a new level of severity to interfere with protests and to make it harder for citizens, journalists and human rights activists to broadcast to the rest of the world what is happening on the ground.

While numerous countries have condemned the illegal coup and the EU and US have imposed sanctions, there have been weak regional efforts to address the crisis or halt the serious rights violations.

ASEAN adopted a relatively weak consensus agreement to end the violence and open up dialogue following a meeting of the regional body in Jakarta in April, but progress has been virtually non-existent.

“The junta has bombed and set fire to villages, reducing them to ashes in ethnic border regions and in upper Myanmar, displacing over 330,000 people, while committing sexual violence against women and LGBTIQ+ persons in detention. Their actions constitute crimes against humanity and war crimes, and they must immediately be held to account,” said Khin Ohmar, chairperson of Progressive Voice.