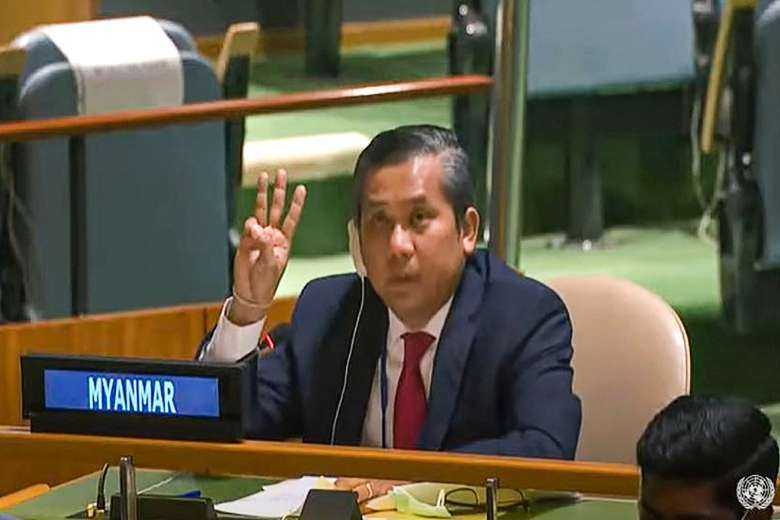 Myanmar's ambassador to the UN Kyaw Moe Tun makes a three-finger salute as he addresses an informal meeting of the UN General Assembly in New York on Feb. 26. (Photo: UN/AFP)

Myanmar’s junta, which continues its reign of terror against civilians, has suffered a setback to gaining international recognition after the United Nations delayed a decision on the rightful representatives of the conflict-torn nation.

On Dec. 1, the nine member UN Credentials Committee, including the US, China and Russia, decided to defer its decision on who will represent Myanmar following a closed meeting on the bid by the junta to replace the ambassadors of the civilian government it deposed.

Anna Karin Enestrom of Sweden, the committee’s chairwoman, told the media the panel had deferred its decision regarding the credentials of Myanmar and Afghanistan.

She said the committee’s report will be made public once it has been issued for the consideration of the UN General Assembly.

However, she declined to say when the decision will be made and whether the current ambassadors will remain in their positions.

Observers say the deferral of the UN committee’s decision means that the junta's attempts to occupy seats at the United Nations is denied for now and possibly until the next General Assembly in 2022.

We are concerned about allegations of weapons stockpiling and attacks by the military, including shelling and air strikes

Myanmar’s junta sought to replace the country’s ambassador to the UN, Kyaw Moe Tun, who opposed the Feb. 1 coup that toppled civilian leader Aung San Suu Kyi and her government.

The decision to deny the junta a seat at the global body came after junta chief Min Aung Hlaing was barred from regional talks including the China-ASEAN summit and ASEAN-Europe meeting following its failure to implement the peace plan agreed at the April meeting.

The UN General Assembly in June condemned the coup in Myanmar and the junta’s crackdown on peaceful protesters.

The UN Security Council on Nov. 10 expressed deep concern over the situation in Myanmar and called for an immediate cessation of violence and for efforts to ensure that civilians are not harmed.

Rights groups and civil society organizations, however, have been dismayed by the Security Council’s inadequate response to Myanmar’s escalating conflict.

Ignoring repeated calls by world leaders to end the violence, Myanmar’s junta has continued its reign of terror in several townships in the country, including the predominantly Christian regions of Chin and Kayah states.

More than 300 houses and four churches have been burned down by troops who set fire to the deserted town of Thantlang in Myanmar’s Chin state, while thousands have fled their homes in several villages in Sagaing region, a Bamar-majority area, due to the junta’s air strikes and raids.

“We are concerned about allegations of weapons stockpiling and attacks by the military, including shelling and air strikes, use of heavy weapons and the deployment of thousands of troops accompanying what security forces assert are counter-terrorism operations, which are disproportionately impacting civilians,” the US and six other countries including the UK, Australia and South Korea said in a Nov. 26 statement.

Since the military coup, the Southeast Asian nation has been plagued by unrest, with peaceful demonstrations against military rule met by a fierce crackdown.

That has triggered a low-level insurgency in urban areas and guerrilla attacks in rural and ethnic areas where minority groups have been engaged in intensifying clashes with the military.

More than 1,300 people have been killed and more than 9,000 have been detained by the junta since the Feb. 1 takeover.