A protester holds a flare as others make the three-finger salute during a demonstration against the military coup in Yangon on June 22. (Photo: AFP)

The Myanmar junta’s violent suppression of resistance movements continues unabated despite religious leaders calling for an end to violence and pursuing dialogue towards peace.

At least 875 people have been killed by security forces since the Feb. 1 coup, mostly anti-coup protesters.

Protesters have daily taken to the streets across the Southeast Asian country since the military seized power and detained elected civilian leaders including Aung San Suu Kyi.

Opposition to the military has gone from peaceful demonstrations to an active self-defense movement with civil resistance groups emerging across the country. Hundreds of young people from cities have gone to ethnic areas controlled by rebels to receive military training.

A clash on June 22 between the military and the People's Defense Force (PDF) in Mandalay, Myanmar’s second largest city, left at least eight dead, according to a state-run television report, which labeled the PDF “terrorists.”

A video circulating on social media showed a soldier firing a grenade at a building where PDF members were staying. At least four bombs exploded including one near a police station following the shootout, according to local sources.

May the heart of Christ touch the hearts of everyone, bringing peace to Myanmar

On June 20, Pope Francis renewed his call for peace in the conflict-torn country, which is mired in political turmoil and fighting that has led to thousands of people being displaced amid a humanitarian crisis.

The pope expressed support for the Myanmar bishops’ appeal, calling the world’s attention to the “heart-rending experience of thousands of people in that country who are displaced and have been dying of hunger.”

“May the heart of Christ touch the hearts of everyone, bringing peace to Myanmar,” the pope said.

Cardinal Charles Bo of Yangon has urged people to be steadfast in faith and hope and pray for a new Myanmar of peace and justice. 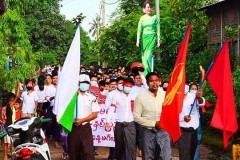 “Guns will never solve this country’s problems. Only a change of hearts can heal this long-suffering nation,” the prelate said in a homily on June 20.

The cardinal has also called for prayers for the army, “for every soldier who holds a gun,” so that their hearts melt and they understand that “their violence is not against an enemy nation but against our own people.”

The open warfare in Mandalay has raised concerns from at least three Western embassies including that of the US.

“We are disturbed by the military escalation and urgently call for a cessation of violence,” the US embassy in Yangon said in a statement on June 22.

The coup has reignited old conflicts between the military and ethnic armed groups and civil resistance groups. More than 175,000 people have been displaced in Kachin, Karen, Chin, Kayah and Shan states, predominantly Christian areas.

Christians have been targeted in Kayah and Chin states, while at least three churches in Kayah were shelled, forcing people who took refuge in the churches to flee into the forests.

The military also raided a Catholic church in Mindate, Chin state, and arrested priests from Chin and Kachin states and Mandalay.