Despite pleas by church leaders, hundreds of doctors are wanted by security forces and at least 157 have been arrested Volunteers wearing personal protective equipment arrange the bodies of people who died from Covid-19 during their funeral at a cemetery in Mandalay on July 14. (Photo: AFP)

The Myanmar junta’s crackdown on medics continues unabated despite Catholic leaders calling for the secure participation of all health workers and volunteers to reach out to the suffering amid the worsening Covid-19 crisis.

Health workers including doctors and nurses have protested against the military coup and joined the mass civil disobedience movement, which is working covertly as members have been targeted by security forces.

Hundreds of doctors are among those wanted by authorities and at least 157 medics have been arrested since the Feb. 1 coup, while security forces have raided health facilities, fired on ambulances and attacked medics.

As part of the latest crackdown, five doctors from a charity group working as volunteers for the treatment of Covid patients in Yangon were arrested on July 19.

The clampdown on medics comes as thousands of people are desperately looking for oxygen for their loved ones at home as Myanmar's healthcare system has virtually collapsed.

Cardinal Charles Bo of Yangon said thousands are infected while hundreds are hurriedly buried in crowded cemeteries as people queue for oxygen in crowded streets.

“It is time to raise an army of volunteers armed with medical kits to reach out to our much-suffering people,” he said.

The outspoken cardinal appealed to authorities to “facilitate the secure participation of all the health workers and the youth to participate in the existential threat to us as a nation.”

The United Nations has warned that Myanmar’s current outbreak of Covid-19 is expected to have devastating consequences for the health of the population and for the economy. 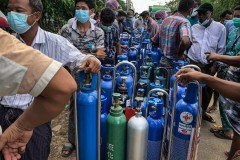 “A renewed ‘whole of society’ approach is needed now more than ever, allowing all health professionals to work in safety, and both public and private providers enabled to contribute to the response,” the UN said on July 19.

Myanmar recorded 289 deaths and more than 5,000 new cases on July 20, bringing total numbers to 234,710 infections and 5,281 deaths, according to the junta-controlled Health Ministry.

But medics and funeral services said the actual toll is much higher as crematoriums are overwhelmed.