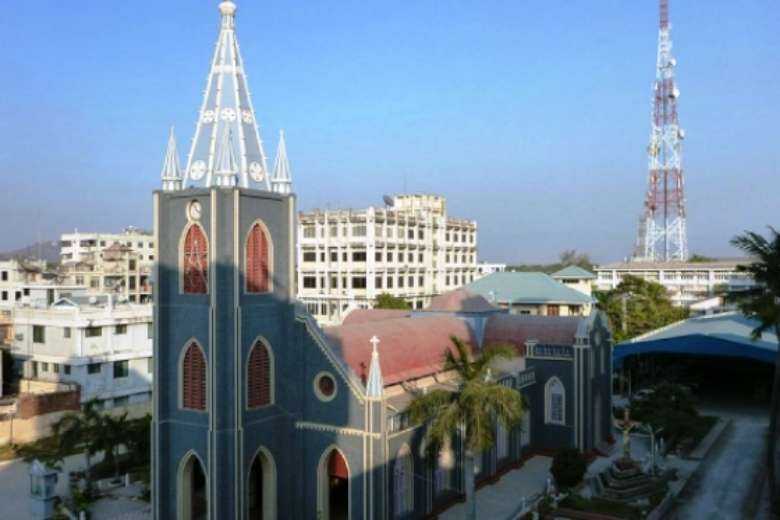 Catholic clergy and institutions continue to be prime targets for the military junta in Myanmar despite calls from across the globe to end the conflict and oppression.

Archbishop Marco Tin Win, some priests and staff were present during the raid but all were safe and none were detained, said church sources.

Soldiers arrived around 2.30pm and some stood guard outside the compound of the cathedral, the second largest in Myanmar, while others with guns carried out a search of all the buildings inside the compound.

“They claimed to have been tipped off about weapons being hidden in the clergy center,” revealed one of the sources. The soldiers left after nearly three hours as they didn’t find any weapons.

The news of the military raid spread quickly among the local Catholic community in the city’s five parishes, causing much concern.

“We were relieved that no one was hurt or arrested and we could resume our church services,” said a parishioner who joined the Way of the Cross after the soldiers left in the evening.

Archbishop Tin Win has designated Saturday evenings for one-hour adoration and the first Sundays of every month for Eucharistic celebration seeking peace in the conflict-torn nation.

The prelate is the only Catholic leader to openly lend moral support to the pro-democracy protesters by taking to the street in front of the clergy’s house in Mandalay last February.

Catholics are a minority in Mandalay, a culturally and predominantly Bamar Buddhist city that has remained largely free from the ongoing conflict between the military and local people’s defense forces (PDFs).

However, three Catholic villages in the Sagaing region that are under the Archdiocese of Mandalay have been severely affected by military attacks and raids, with four people being killed and thousands displaced from their homes.

The latest targeting of a cathedral came after attacks on churches belonging to Catholic, Baptist and other denominations in the Christian strongholds of Chin state and Kayah state. Priests and pastors have been arrested while many unarmed civilians, including Christians, have been killed.

The dioceses of Hakha, Kalay, Loikaw and Pekhon out of the 16 dioceses in the conflict-torn nation have been badly hit following last February’s military coup that triggered street demonstrations and growing resistance by newly emerged militias.