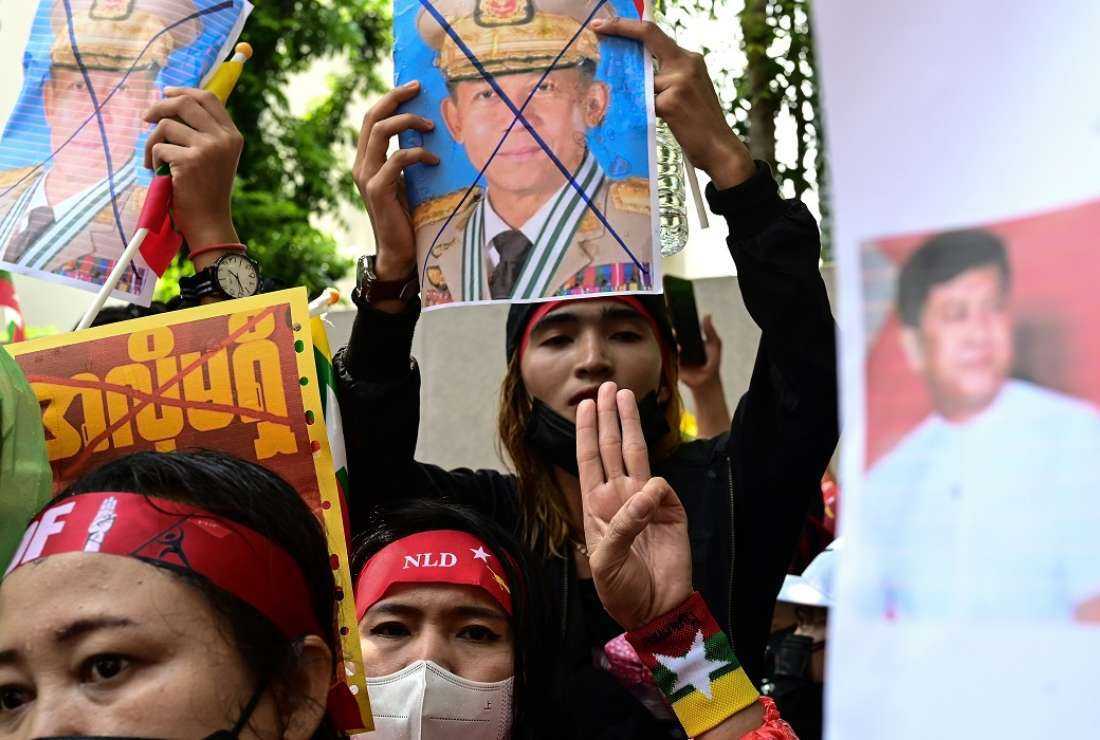 Protesters show the three-finger salute and a crossed-out image of Myanmar military chief Min Aung Hlaing during a demonstration against the Myanmar military junta's execution of four prisoners, outside the Myanmar embassy in Bangkok, Thailand on July 26, 2022. (Photo: AFP)

Myanmar’s military junta has committed crimes against humanity systematically amid ongoing conflicts in the beleaguered country following the coup last year, according to a new report by the United Nations.

The UN’s Independent Investigative Mechanism for Myanmar (IIMM) said in its annual report on Aug. 9 that sexual and gender-based crimes, including rape and other forms of sexual violence, and crimes against children have been perpetrated by members of the security forces and armed groups.

“There are ample indications that since the military seized power in February 2021, crimes have been committed in Myanmar on a scale and in a manner that constitutes a widespread and systematic attack against a civilian population and the nature of potential criminality is also expanding,” the report says.

It said this includes the execution of four pro-democracy activists on July 25, which was carried out after the report was prepared.

“Perpetrators of these crimes need to know that they cannot continue to act with impunity. We are collecting and preserving the evidence so that they will one day be held to account,” Nicholas Koumjian, head of the IIMM, said.

“Crimes against women and children are among the gravest international crimes"

The report also revealed children in Myanmar have been tortured, conscripted and arbitrarily detained, including as proxies for their parents.

“Crimes against women and children are among the gravest international crimes, but they are also historically underreported and under-investigated,” Koumjian said.

The latest report came just two weeks before the somber fifth-year commemoration of the military’s crackdown on Rohingya Muslims in Rakhine state that drove more than 740,000 people into neighboring Bangladesh since August 2017.

“While the Rohingya consistently express their desire for a safe and dignified return to Myanmar, this will be very difficult to achieve unless there is accountability for the atrocities committed against them, including through prosecutions of the individuals most responsible for those crimes,” Koumjian said.

The IIMM was created by the UN Human Rights Council in 2018 to collect and analyze evidence of the most serious international crimes and other violations of international law committed in Myanmar since 2011.

A UN fact-finding mission reported that “genocidal acts” carried out in Rakhine by Myanmar’s military in 2017 while the United States labeled it a “genocide” against the Rohingya.