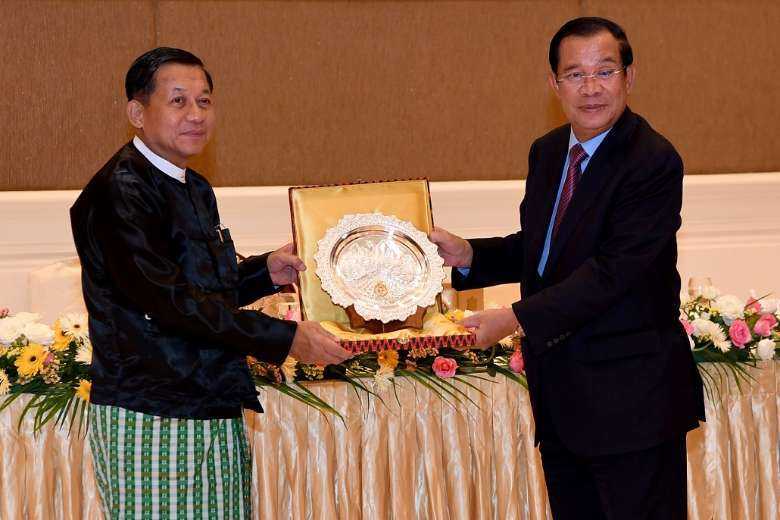 The military leader of Myanmar, General Min Aung Hlaing, asked Cambodian Prime Minister Hun Sen to be his “Godbrother” during a controversial visit aimed at bringing the strife-torn country back into the Association of South East Asian Nations (ASEAN).

“I was really excited to hear when Myanmar's senior general Min Aung Hlaing asked the premier to be his Godbrother,” Fresh News quoted journalist Sam Aun as saying.

“Min Aung Hlaing told premier Hun Sen that in the future if the premier celebrates any family gatherings such as [a] wedding ceremony, he would like to be invited as a guest,” it said.

Hun Sen’s two-day visit to Myanmar on Jan 7-8 as chair of ASEAN drew much criticism from human rights groups claiming the visit would legitimize Min Aung Hlaing, who ousted Aung San Suu Kyi and her elected government in a military coup on Feb. 1 last year.

Myanmar has been shunned by other ASEAN states and banned from attending the usual round of annual summits. Charles Santiago, chair of the ASEAN Parliamentarians for Human Rights, accused both leaders of hijacking the trade bloc for their own “authoritarian purposes.”

“Hun Sen has begun his chairmanship of ASEAN by sabotaging the group’s position, as stated in the Five-Point Consensus and by the exclusion of the junta from ASEAN meetings,” he said, adding their joint statement claiming a breakthrough was misguided and dangerous.

“It is a brazen attempt by these two coup leaders to hijack ASEAN for their own authoritarian purposes, undermining the Myanmar people’s fight for democracy and human rights.”

Santiago urged ASEAN’s other eight members — Brunei, Indonesia, Laos, Malaysia, the Philippines, Singapore, Thailand and Vietnam — to clarify their position with a statement that support’s the return of the democratic process in Myanmar.

“It is their responsibility to ensure that Hun Sen adheres to the group’s Five-Point Consensus approach and challenges this reckless cowboy diplomacy,” he said.

However, Hun Sen claimed the visit, the first by a foreign leader since the coup, had resulted in an extension of a ceasefire with ethnic armed groups until the end of this year and moved forward the Five-Point Consensus as approved by ASEAN to end the conflict.

Violence since the coup has so far claimed more than 1,400 lives.

“ASEAN and its aspiring partners, as well as Myanmar itself, still have a long way to go to implement the ceasefire and provide effective assistance,” Hun Sen said after the visit.

Prak Sokhonn, Cambodia's foreign minister and ASEAN’s special envoy to Myanmar, echoed those sentiments, adding he was optimistic that a solution could be found for the crisis.

“I think what we have achieved from the negotiations with Myanmar’s leaders is a positive outcome and a step forward for the implementation of the Five-Point Consensus,” he said.

“Those people who oppose the ceasefire and humanitarian aid are the people who favor war and do not want to bring Myanmar back to normalcy.”