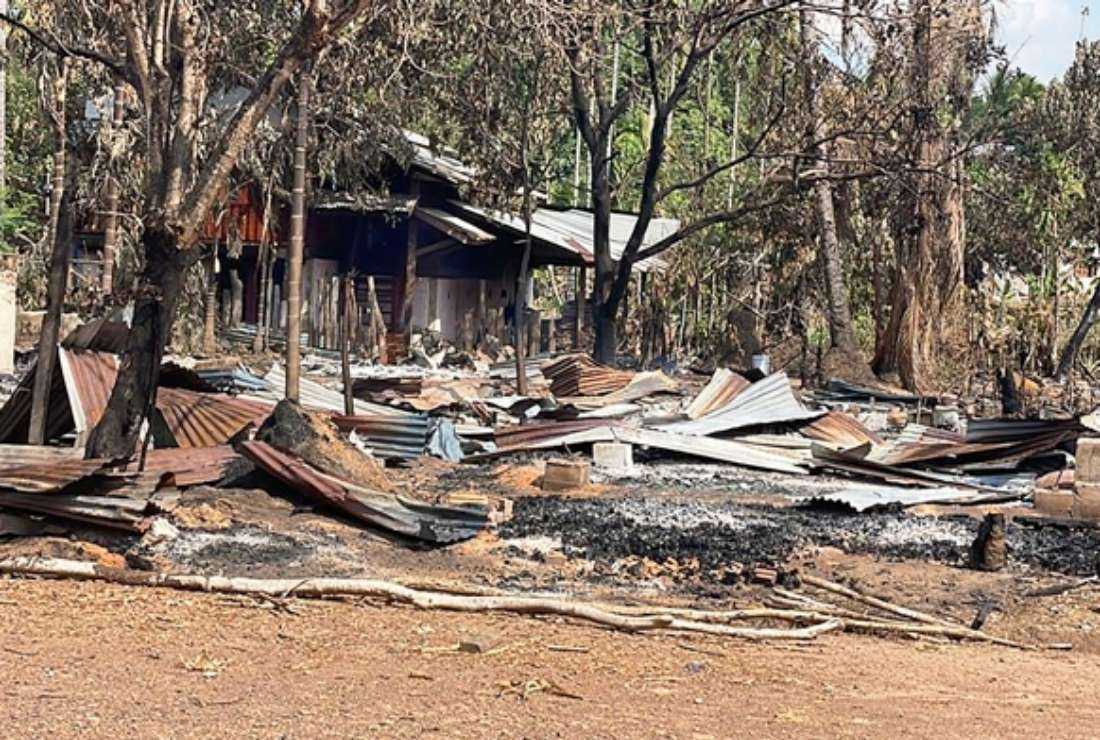 Burned remains of houses after airstrikes and mortar attacks by the Myanmar military on a village in Doo Tha Htoo district in eastern Myanmar's Kayin state on May 3. (Photo: Free Burma Rangers/AFP)

Civilian homes in a historic Catholic village have been burned down by junta troops in Myanmar for the second time in a month.

More than two-thirds of an estimated 500 houses were destroyed in fires set during a military raid on Chan Thar village in the predominantly Buddhist Sagaing region on June 7, according to local sources.

It remains unclear if the century-old Assumption Church, convent and priest's house were damaged or not.

On May 7, some 20 houses were destroyed in Chan Thar in fires set by troops.

The troops used artillery shelling before entering the village and then set on fire one house after another. No other villages in the vicinity were raided, said a local source.

“A motorcyclist had a narrow escape when a shell dropped near him and exploded. The villagers were seen crying as they witnessed their homes go up in smoke,” another source added.

Most of the villagers have already fled their homes for safer areas including church premises and relatives’ homes in Mandalay and other townships since January 2022.

The junta is specifically targeting three historic Catholic villages in the Buddhist Bamar heartland of Sagaing to tackle growing resistance against military rule from people’s defense forces suspected to be based there.

Chaung Yoe, Monhla and Chan Thar, falling in Mandalay Archdiocese, are known as Bayingyi villages because their people claim descent from Portuguese adventurers who arrived there in the 16th and 17th centuries. The villages have produced many bishops, priests and religious nuns and brothers.

The latest artillery and arson attack came nearly three weeks after at least 320 out of the 350 households were set ablaze at Chaung Yoe during a military raid on May 20.

The village has been raided several times by troops who shot dead two people, beaten up three others, destroyed statues and looted property during a Jan. 10 raid.

The junta’s offensive in the Sagaing region continues with artillery shelling, airstrikes and the burning of houses in several villages. Mobile phones and internet lines are cut off in some townships.

At least 18,900 homes have been burned down across the country since the February 2021 coup, with the Sagaing region reporting the highest number of 3,840 destroyed homes, according to the latest report by Research Myanmar.

The ongoing conflict, particularly in Christian strongholds like Kayah, Chin, Karen and Kachin states, has resulted in churches and convents being attacked and raided. Priests and pastors have also been killed and arrested.

More than 1,900 people including over 100 children have been killed and more than 13,000 detained since the coup.