Myanmar has 'weaponized' blocking of aid in Kachin State 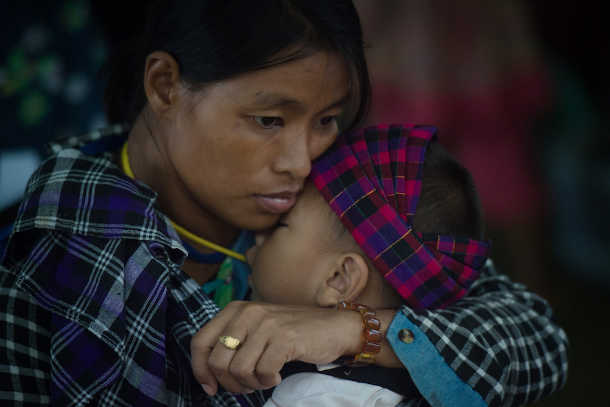 An internally displaced woman and a child look on at a temporary shelter at a church compound in Myitkyina, Kachin State, on May 13. Often called the "forgotten war," the Kachin conflict is a messy struggle over autonomy, ethnic identity, drugs, jade and other natural resources, between the Kachin Independence Army and the Myanmar state. (Photo by Ye Aung Thu/AFP)

A rights group has accused Myanmar's government of blocking humanitarian aid to thousands of people displaced by conflict in Kachin State for more than seven years.

Fortify Rights made the claim on Aug. 30 as they launched their 68-page report "They Block Everything": Avoidable Deprivations in Humanitarian Aid to Ethnic Civilians Displaced by War in Kachin State."

"Consecutive governments and the military have wilfully obstructed local and international aid groups, denying Kachin civilians access to aid," said Matthew Smith, chief executive of Fortify Rights, in a statement. "This may amount to a war crime, giving even more reason for the U.N. Security Council to refer Myanmar to the International Criminal Court."

The group's report details how Myanmar authorities — particularly the Myanmar military — have weaponized the denial of humanitarian aid in Kachin State for years.

It reveals how Myanmar's authorities and military have imposed restrictions on access to food, healthcare, shelter, water and sanitation to tens of thousands of internally displaced persons.

Kachin State is 90 percent Christian and has been beset by sporadic fighting for several decades. More than 100,000 people remain displaced in Kachin and neighboring Shan states after being driven from their homes since fighting resumed in 2011.

More than 8,000 people have been newly displaced in Kachin and Shan states since a fresh bout of fighting beginning in early April when the military stepped up offensive operations in Kachin State, launching attacks against the Kachin Independence Army (KIA).

"Depriving civilians of aid in an attempt to overcome an ethnic army is a perverse, unlawful and ineffective strategy," said Smith. "All parties to this war have a duty to protect civilians and that includes by ensuring access to adequate aid."

The report said that without ready access to basic and lifesaving aid and assistance, displaced civilians have been forced to take risky journeys in search of food and essential items outside displacement camps, exposing them to the dangers of landmines and armed conflict in Myanmar and exploitation and arbitrary arrest and detention in China.

Hkalam Samson, president of the Kachin Baptist Convention, said the report reveals the reality of the dire situation faced by displaced people.

"We have been facing human rights violations by Myanmar's military in Kachin State for decades and our wounds are already ripe, but the world only knows when it erupted in Rakhine State," Samson told ucanews.com.