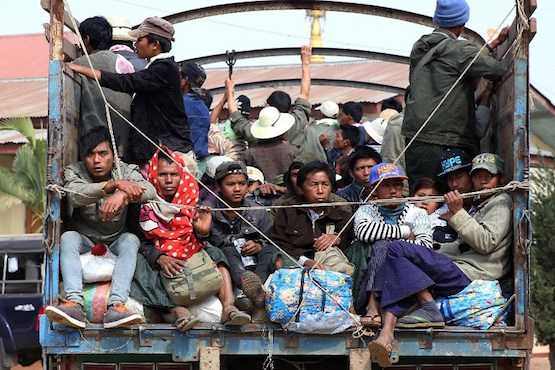 People who fled conflict areas near the Myanmar and Chinese border arrive on a truck at a temporary refugee camp at a monastery in Lashio, northern Myanmar on Feb. 15. Myanmar’s new civilian government is expected to hold talks with armed groups to end fighting. (Photo by AFP)

Myanmar's new civilian government is expected to hold talks May 10 with eight armed groups, including an armed group from Christian majority Karen State, who were signatories of last October's national cease-fire accord.

The National League for Democracy government faces an uphill battle to end the decadeslong civil wars as fresh fighting has erupted in northern Shan State only a week after conflict broke out once more in religiously divided Rakhine State.

Aid groups said at least 2,000 people have been displaced in northern Shan State as fighting flared up again on May 1 between the Ta'ang National Liberation Army and the Restoration Council of Shan State.

These people have fled from their villages since May 7 and taken refuge in the homes of relatives, established refugee camps and monasteries.

"We are now busy with help for remaining refugee camps in northern Shan State," Eddie, who uses only one name, told ucanews.com.

"We are still trying to carry out the assessment of displaced people as they are spread in different areas. A few civil society groups have provided humanitarian response to the people so far," Lwal Poe Ngeal, general-secretary of Ta'ang Women's Organization told ucanews.com.

She added that the Ta'ang groups are organizing a fundraising event in Yangon this week to support these refugees.

In Rakhine State, the number of displaced people has been increased in recent days due to conflict between the military and the Arakan Army since last month.

Soe Naing of the Rakhine Social Network, which helps refugees, said that more than 1,800 people have been displaced, and will be visiting the camp May 10 to provide a fresh assessment.

Tensions remain high in Rakhine State as the still-powerful military said in early may that the Arakan Army opposes Myanmar's democratic system and strongly rejected the term of "army, as they are an insurgent group."

Still, while regional skirmishes appear to be rising, the most damaging conflict remains the full-fledged civil war in the Christian-stronghold area of Kachin State.

Skirmishes erupted between the military and the Kachin Independence Army in Kachin State and northern Shan state last week.

The National League for Democracy-led government has pledged to prioritize the peace process and State Counselor Aung San Suu Kyi recently called for a wide-arranging peace conference within two months.