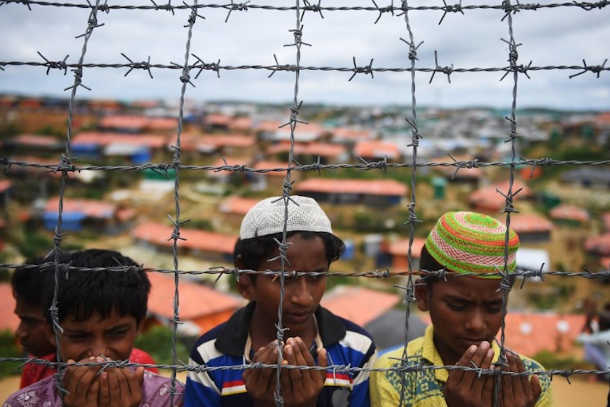 Rohingya refugees perform prayers as they attend a ceremony organised to remember the first anniversary of a military crackdown that prompted a massive exodus of people from Myanmar to Bangladesh, at the Kutupalong refugee camp in Ukhia, Cox's Bazar on Aug. 25. (Photo by Dibyangshu Sarkar/AFP)

Senior military officials in Myanmar must be prosecuted for genocide and war crimes against Rohingya Muslims and other ethnic minorities, a U.N. fact-finding mission has said.

The mission, established by the U.N. Human Rights Council in March 2017, found patterns of gross human rights violations and abuses committed in the states of Rakhine, Kachin and Shan.

"The Tatmadaw's tactics are consistently and grossly disproportionate to the actual security threats, especially in Rakhine State, but also in northern Myanmar," it said using the official name of the armed forces of Myanmar.

The International Criminal Court (ICC) is also deliberating whether it has the mandate to prosecute Myanmar officials responsible for over 700,000 Rohingya Muslims fleeing from Rakhine State to Muslim-majority Bangladesh since a military crackdown began in August 2017 in response to attacks on security posts by suspected Rohingya insurgents.

The United Nations has dubbed the crackdown a textbook example of ethnic cleansing.

"The crimes in Rakhine State, and the manner in which they were perpetrated, are similar in nature, gravity and scope to those that have allowed genocidal intent to be established in other contexts," the report said.

The U.N. also warned Myanmar it has sufficient information "to warrant the investigation and prosecution" of senior officials in the Tatmadaw's chain of command.

It said a "competent" court would determine their liability for "genocide" in relation to the situation in Rakhine State.

It described the military's response to the attacks last August by the Arakan Rohingya Salvation Army (ARSA) as brutal and premeditated.

They indicating a "a level of pre-planning and design" consistent with Min Aung Hlaing's "unfinished job" of solving what Myanmar regards as its long-standing Bengali problem, the report stated.

It was referring to how Rohingya Muslims are denied citizenship in Myanmar and seen as unwanted Bengali refugees despite having lived in the Buddhist-majority country for many decades.

The government co-run by State Counselor Aung San Suu Kyi has allowed hate speech and failed to protect ethnic minorities in the country, the report found.

"Through their acts and omissions, the civilian authorities have contributed to the commission of atrocities and crimes," it said.

"Suu Kyi has not used her de facto position as head of government, nor her moral authority, to stem or prevent the unfolding events in Rakhine State," the report added.

It said the systematic and decades-long abuse the government has meted out to the Rohingya was exclusionary, having consistently denied them citizenship and severely restricted their freedom of movement.

In Kachin State and Shan State, the mission also verified a number of armed conflicts, confirming consistent patterns of violations of international law.

"Tatmadaw operations in northern Myanmar are characterized by systematic attacks directed at civilians and conducted in flagrant disregard for life, property and the well-being of civilians," the report said.

The U.N. mission, which has not been granted access to Myanmar, interviewed 875 victims and witnesses of alleged crimes by Myanmar's military, by speaking to refugees living in camps in Bangladesh and those in other countries.

It also analyzed documents, photos, videos and satellite images. A full report will be published and presented to the U.N. Human Rights Council on Sept. 18.

Amnesty International has said the U.N.'s report has brought yet more damning evidence of the Myanmar security forces' atrocity crimes against the Rohingya and against ethnic minorities in northern Myanmar.

"This report, which adds to a mountain of evidence of crimes under international law committed by the military, shows the urgent need for independent criminal investigation and is clear that the Myanmar authorities are incapable of bringing to justice those responsible," said Tirana Hassan, director of crisis response at Amnesty International.

Myanmar's government and military leaders have yet to respond to the report.