Parish priests, nuns and parishioners in Kayah state have been forced to flee to safer areas 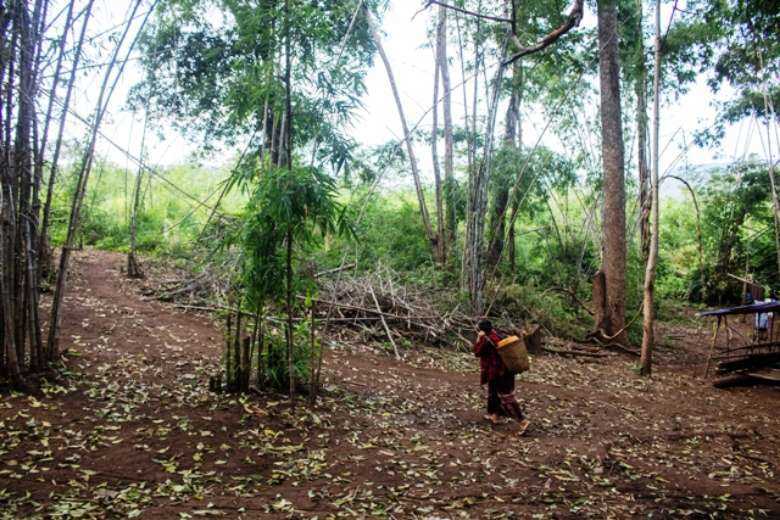 A woman carries a bucket to collect water at a camp near Demoso township in Myanmar's Kayah state, where fighting between Myanmar’s military and rebel groups has forced many people to flee to safety. (Photo: AFP)

Some 16 parishes in Loikaw Diocese in Myanmar’s Kayah state have been totally abandoned with the escalation of the conflict between military and rebel forces.

The green and mountainous eastern region bordering Thailand was relatively peaceful for decades but has seen intense fighting since May 2021.

Parish priests, nuns and parishioners from these parishes have fled to safe areas, according to church officials.

Nearly two-thirds of the 90,000 Catholics in Kayah state have been forced to flee their homes, they added.

The junta has unleashed airstrikes and artillery shelling, forcing thousands of people including women, children, the elderly and the infirm to flee their homes to seek refuge in nearby jungles or churches in neighboring villages and towns.

At least seven Catholic churches have been hit by artillery shelling and airstrikes by Myanmar’s military in Loikaw Diocese, with 16 out of 38 parishes severely affected by the intensifying fighting.

The Myanmar military has killed civilians, used people as human shields and committed other atrocities that may amount to war crimes

More than 650 houses and other civilian properties including churches, monasteries and schools have been burned or destroyed in Kayah since May 2021, according to reports cited by the UN.

Meanwhile, some parishes in Pekhon Diocese that covers Shan state and border areas of Kayah state have also been affected by the conflict.

The Myanmar military has killed civilians, used people as human shields and committed other atrocities that may amount to war crimes, Fortify Rights said in a report last month.

At least 170,000 civilians in Kayah state or more than half of its population of 300,000 have been forced to abandon their homes, according to the Karenni Civil Society Network.

On Christmas Eve, more than 35 civilians including two children were killed and their bodies set on fire in Mo So village, Hpruso township, by troops.

Churches and other community institutions are being deliberately targeted by junta forces in the predominantly Christian Kayah, Chin and Kachin states.

A handful of churches belonging to Catholic, Baptist and other denominations in the Christian strongholds of Chin state in the west have been bombed and destroyed in deliberate attacks by junta forces.

Four dioceses — Hakha, Kalay, Loikaw and Pekhon — out of the 16 dioceses in the conflict-torn nation have been badly hit following last February's military coup that triggered peaceful demonstrations and growing resistance by newly emerged militias.

The rising conflict has resulted in churches being shelled and raided. Priests and pastors have been arrested while many unarmed civilians, including Christians, have been killed.