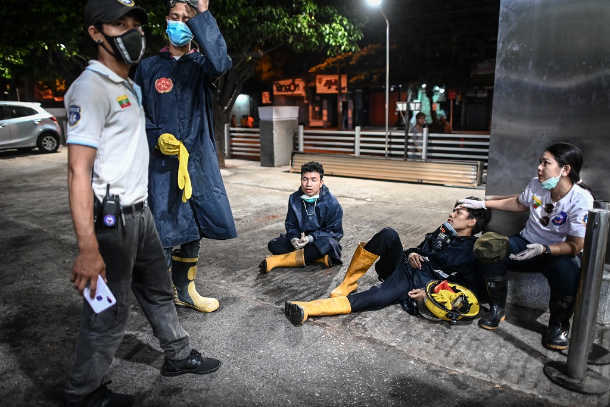 Volunteers rest after spraying disinfectant in a Yangon shopping centre as a preventive measure against the spread of the Covid-19 pandemic on April 1. (Photo: Ye Aung Thu/AFP)

Just nine days ago, shelling in Minbya township in the war-torn state killed a child and injured at least 15 civilians.

From March 23-27, more than 4,000 people were newly displaced in Kyauktaw township due to the conflict between the Myanmar military and the Arakan Army. That doubled the number of people displaced in the township, according to the United Nations.

The UN Office for the Coordination of Humanitarian Affairs reported on March 31 that more than 70,000 people had been displaced at 154 sites in Rakhine and Chin state over a 12-month period.

The Arakan Army is a largely Buddhist militia fighting for greater autonomy for indigenous ethnic Rakhine in the state. The guerrilla outfit was formed in Rakhine in 2009 to protect ethnic Rakhine and is estimated to have several thousand well-equipped soldiers. It is a relatively new fighting force in Myanmar’s forgotten conflict and has been going from strength to strength in recent years.

Rakhine also has a separate conflict that has seen more than 700,000 Rohingya Muslims flee to neighboring Bangladesh since August 2017 due to military offensives.

On March 23, the government formally branded the Arakan Army a terrorist group, saying it has incited fear and disrupted stability by attacking government and civilian targets.

Peace is a priority for Myanmar’s de facto civilian leader Aung San Suu Kyi, who initiated the 21st Century Panglong peace conferences in August 2016, May 2017 and July 2018. However, renewed fighting in Rakhine has hampered efforts to engineer a fourth edition.

The Nobel laureate has pledged to end hostilities in the country that has been bedeviled by conflict for nearly 70 years.

Conflicts not resolved through war

In an appeal issued on March 23, UN secretary-general Antonio Guterres urged warring parties across the world to lay down their weapons in support of the bigger battle against Covid-19: the common enemy that is now threatening all mankind.

“The fury of the virus illustrates the folly of war,” Guterres said, calling for an immediate global ceasefire in all corners of the world. “It is time to put armed conflict on lockdown and focus together on the true fight of our lives.”

Pope Francis has joined the UN chief’s call for a global ceasefire as the world faces the onslaught of the Covid-19 pandemic.

“May our joint fight against the pandemic bring everyone to recognize the great need to reinforce brotherly and sisterly bonds as members of one human family,” said the pope.

“Conflicts are not resolved through war and antagonism, and differences must be overcome through dialogue and a constructive search for peace. To acknowledge the presence of a power that is above all.”

Bishop Alexander Pyone Cho of Pyay Diocese, which covers Rakhine state, said it is time to end fighting as the world grapples with coronavirus.

“It's a worrying situation as civilians bear the brunt of the conflict as fighting still rages,” Bishop Pyone Cho told UCA News, adding that another challenge is that people in conflict-torn regions lack awareness of Covid-19.

Myanmar has 20 confirmed Covid-19 cases including one death, according to Johns Hopkins University data on April 2.

The government has taken preventive measures by canceling festivals and gatherings including the Thingyan water festival on April 13-16. It has temporarily banned all international commercial flights and entry visas for foreigners while closing land borders where thousands of migrant workers returned home from neighboring Thailand.

Cardinal Charles Bo of Yangon said that, more than anything, all powers can learn to acknowledge the presence of a power that is above all.

“With great pain, many countries realize that they have more soldiers in their countries in the business of killing than they have doctors who can save lives,” Cardinal Bo said in his Easter message.

Human Rights Watch has warned that intentionally shutting down or restricting access to the internet violates multiple rights and can be deadly during a health crisis such as the Covid-19 pandemic.

The conflict impedes humanitarian responses and prevents assistance to “women, children, disabled, marginalized and displaced who are already the most vulnerable groups during a conflict,” the ambassadors of the US, Britain and the European Union said in a statement issued on April 1.

“We support all calls for a cessation of hostilities between the Myanmar military and armed organizations, resolution of grievances through dialogue and a lifting of any internet and media restrictions.”