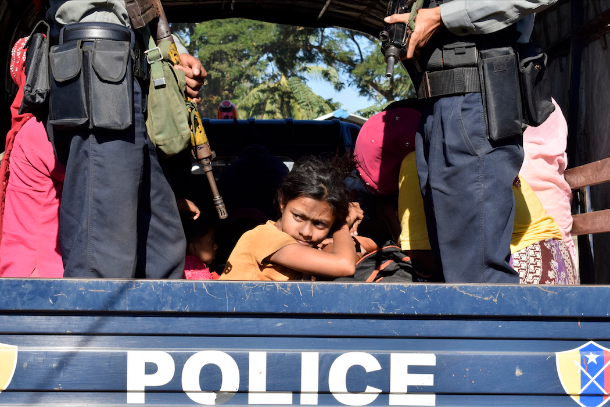 Myanmar police escort Rohingya Muslims back to their camp in Sittwe, Rakhine State, on Nov. 30. They tried to flee Myanmar by boat but were caught en route to Malaysia. (Photo by AFP)

Myanmar's internal commission of inquiry into rights' abuses in troubled Rakhine State against Muslim Rohingya has called on people to provide evidence of violations by Myanmar's armed forces.

Individuals, groups, witnesses and alleged victims have been called on to submit their accounts, with supporting data and evidence such as audio and video recordings as well as photographs and any relevant documentation, no later than Jan. 31, 2019.

The move has been met with skepticism from a leading rights group and Rohingya refugees who have little faith in the commission.

The commission said in a statement Dec. 12 that it would will arrange a mutually convenient time and place for meetings and all submissions would be kept 'confidential'.

The so-called Independent Commission of Inquiry begun its probe in northern Rakhine Aug.31, a year after a bloody crackdown by Myanmar's military caused more than 700,000 Rohingya to flee into neighboring Bangladesh.

Myanmar July 30 established the commission with two international and two local members to be led by Rosario Manalo, a former deputy foreign minister of the Philippines, following mounting international pressure over the military's atrocities.

The commission is yet to visit to Rohingya refugee camps in Bangladesh.

He added that it was unlikely that randomly seeking submissions would do much to increase its standing.

He sees the commission as "just going through the motions" rather than conducting a real investigation. "Without ironclad guarantees to ensure confidentiality and real systems to protect people against retaliation, it's likely there will be very few submissions from victims on the ground, and that's a shame because people are waiting for real justice and accountability," Robertson told ucanews.com.

Rezwan, 20, a Rohingya refugee from Kutupalong refugee camp who arrived there in 2017, said community leaders have gathered a great deal of evidence that to prove the military, as well Buddhist mobs and militias, killed people and burned their homes.

She did not think a single Rohingya would testify to the Myanmar's Rakhine commission.

"If I go to Myanmar they can arrest me, torture or kill me," Rezwan told ucanews.com.

She added that Rohingya would provide documents and evidence if the commission came to Bangladesh.

But he too was afraid the commission would misuse evidence or destroy it.

On Dec. 13, the U.S. House of Representatives passed a resolution declaring that the crimes committed by Myanmar's military against Rohingya constitute 'genocide'.

A special United Nations Fact-Finding Mission found that the Myanmar military's persecution of Rohingya Muslims in Rakhine State amounted to genocide and called for military leaders to be prosecuted at the International Criminal Court.