Top prelates issues call in an open letter after 129-year-old church in Mandalay archdiocese was torched on Jan. 15 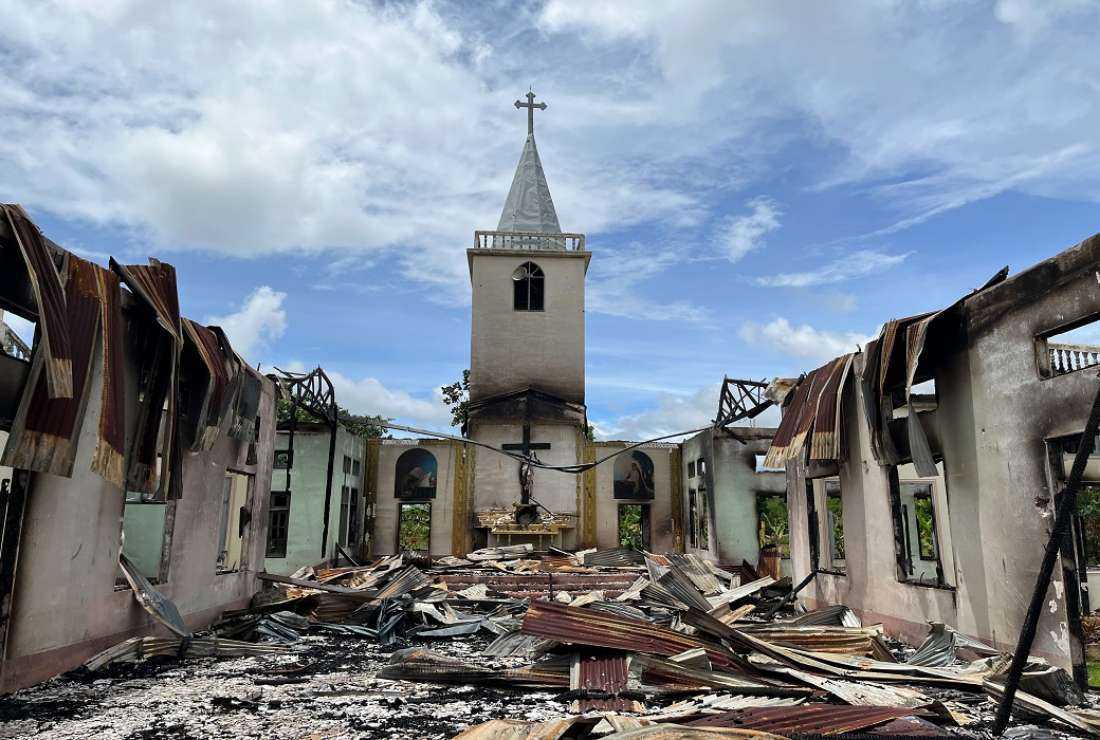 This handout photo from Amnesty International taken between June 27 and July 4, 2022 and released on July 20, 2022, shows a Christian church destroyed after being burned down by the Myanmar military, in Daw Ngay Ku village in Hparuso township, in eastern Myanmar's Kayah state. (Photo: AFP)

The Church in Myanmar has urged the country's military rulers to protect places of worship following a series of attacks by the army in Christian-majority areas of the civil war-torn Southeast Asian nation.

In the latest attack on Christian places of worship, the army, which toppled the civilian government in February 2021, torched the 129-year-old Assumption Church in Mandalay archdiocese on Jan.15.

“Increasingly, places of worship and monasteries, where communities seek peace and reconciliation, are themselves under attack,” the Church said in an open letter, signed by Cardinal Charles Bo of Yangon, and Archbishops Marco Tin Win of Mandalay and Basilio Athai of Taunggyi.

“Why are these sacred places attacked and destroyed?” they asked in the letter, released on Jan.20.

The senior prelates cited international pacts like the Hague Convention which call for the protection of places of worship, places of learning, and places of healing.

“As a nation, we need to heal. Healing comes through our deep sense of interrelatedness. Places of worship promote this interdependence, leading to peace,” they said.

In the Jan. 15 attack, a century-old convent of the Franciscan Sisters was also set on fire by the military.

Five out of 16 dioceses in the country — Loikaw, Pekhon, Hakha, Kalay and Mandalay — are affected by the ongoing conflicts between the army and ethnic rebel groups, some of whose members belong to various Christian denominations.

The letter, however, did not directly blame the military junta for the attacks on Christian-majority areas.

Chan Thar village in Mandalay archdiocese suffered multiple raids by the army last year, and its 500 homes were gutted by fire due to repeated arson attacks.

“Let all guns fall silent, let us reach out to all, as brothers and sisters and start the sacred pilgrimage of peace, united as a nation and as a people,” said the letter.

Myanmar's junta started a crackdown on anti-coup protesters and has renewed fighting against ethnic rebel groups, including those in Christian-majority regions like Kachin, Kayah, Karen and Chin states and central Myanmar’s Bamar heartland.

Military offensives involving airstrikes and artillery shelling have destroyed villages and killed around 23,521 people in total.

Pope Francis has repeatedly called for peace and reconciliation in Myanmar, and decried the recent destruction of the Catholic church.

“My thoughts, with pain, go in particular to Myanmar, where the church of Our Lady of the Assumption in the village of Chan Thar, one of the oldest and most important places of worship in the country, was set on fire and destroyed,” the pope said during the Angelus on Jan.22.