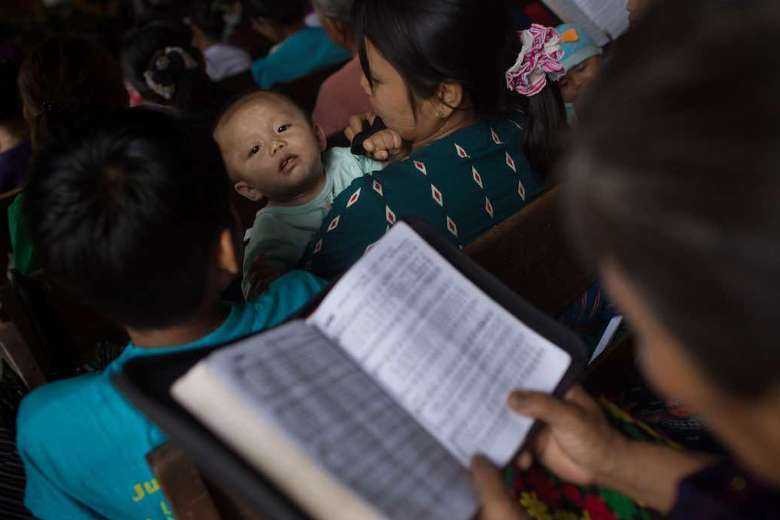 In this picture taken on May 13, 2018, internally displaced people and local villagers attend a church service in Myitkyina, Kachin state. Often called the 'forgotten war', the Kachin conflict is a messy struggle over autonomy, ethnic identity, drugs, jade and other natural resources, between the Kachin Independence Army (KIA) and the Myanmar state. (Photo by Ye Aung THU / AFP)

They said the Church has continued its mission for the people who are most in need amid challenges such as restrictions and funding shortfalls.

“As the rainy season approaches, tarpaulins to use as shelter are in urgent need. But the support of donors is becoming weaker,” a senior clergyman from Loikaw diocese which covers Myanmar’s eastern Kayah state told UCA News.

He said the IDPs live poorly in makeshift camps and accommodation is congested.

More than 260 IDPs have taken refuge in the Church compound in Loikaw, Kayah’s state capital, while thousands of others are in the jungle and makeshift camps in remote areas.

“Despite difficulties, our response to the IDPs is ongoing with providing food, tarpaulins and medicines,” he said.

Fighting continues to escalate between the military and people's defense forces in the Catholic stronghold of Kayah state where the junta has unleashed airstrikes and artillery shelling, forcing thousands of people including women, children and the elderly to flee their homes to seek refuge in nearby jungles or churches in neighboring villages and towns.

“Gunfire has fallen silent around Loikaw town so far but we can hear the sound of guns being fired in nearby townships,” the cleric said.

He added some people went back to Loikaw but most of the IDPs remain in southern Shan state as the situation in the town is yet to become stable.

At least 170,000 civilians in Kayah state — more than half of its population of 300,000 — have been forced to abandon their homes, according to the Karenni Civil Society Network.

At least seven Catholic churches have been hit by artillery shelling and airstrikes by Myanmar’s military in Loikaw diocese, with 16 out of 38 parishes severely affected by the intensifying fighting.

Catholic bishops in Myanmar have appealed for humanitarian access to IDPs to provide their basic needs.

Last June, Pope Francis backed the call of Myanmar bishops who appealed for humanitarian corridors to allow safe passage for those fleeing.

The Southeast Asian nation is facing a humanitarian crisis triggered by a political crisis after the military seized power that toppled elected civilian leaders in February 2021.

The crisis has been dragged on despite the Association of Southeast Asian Nations (ASEAN) leading diplomatic efforts to solve it, but its response has been ineffective in pressuring the military regime.

“We will continue to support ASEAN’s efforts to facilitate a peaceful solution in the interest of the people of Myanmar, including through the work of the Special Envoy of the ASEAN Chair on Myanmar, in building confidence and trust with full access to all parties concerned, and effective delivery of humanitarian assistance to the people of Myanmar, including those who are the most in need, without discrimination,” the bloc’s leaders said in a joint statement after the two-day US-ASEAN summit in Washington on May 12-13.