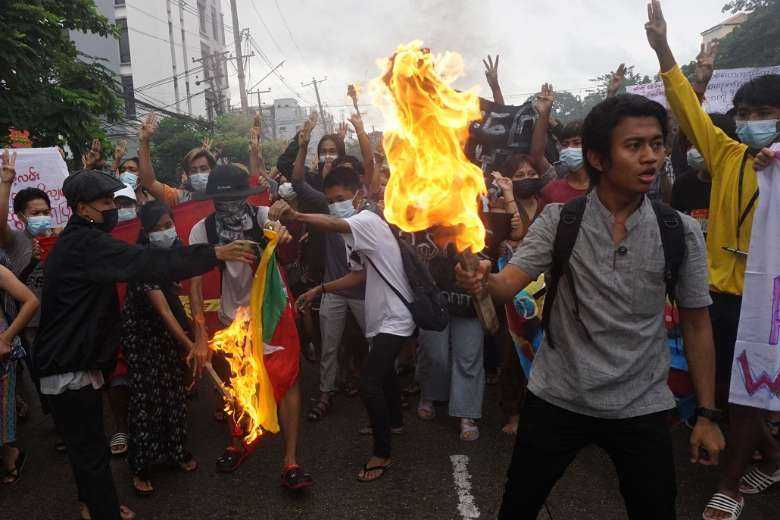 Protesters burn a Myanmar flag and a military uniform as they take part in a flash mob demonstration against the military coup in Yangon on July 1. (Photo: AFP)

It’s a hectic time for Catholic social workers and volunteers in eastern Myanmar responding to the needs of thousands of internally displaced persons (IDPs) who have taken refuge in churches, remote villages and the jungle.

The Church in Kayah state and neighboring Shan state is playing a vital role in supplying humanitarian aid.

He recalled that in the early days of fighting that erupted in Kayah on May 21, they couldn’t send some aid to IDPs directly due to restrictions and lack of security.

“They left the supplies in the nearest area to the people who took refuge in the jungle or relatives’ homes and then they would come and pick up the packages,” he said.

Another burden for IDPs is that they have had to flee from churches that were supposedly safe yet were targeted by the military.

The May 23 attack on a church in Kantharyar village, near state capital Loikaw, killed four people and wounded eight others as more than 300 IDPs took refuge there.

The emergency response team of Loikaw Diocese has covered around 45,000 people who took refuge in churches, convents, relatives’ homes and the jungle in Kayah state, according to a local priest.

Mary Wai*, a 24-year-old Catholic from Demoso township, which has been the scene of intense fighting, said it was the first time in her life she had flee from her home. Along with her parents and young brother, she has been taking refuge in a village in Dorokhu parish since May 29.

An estimated 6,000 people have sought refuge in the villages in Dorokhu Parish, which has not been affected by the recent conflict.

It’s the second place for them as they took refuge in a remote village for several days but had problems with overcrowding and accessing clean water.

“My family has enough food so far but those who have many family members face difficulties as it takes time for aid to get through. I want the fighting to end as soon as possible and we must win the fight so that we may be able to return home safely,” she told UCA News.

Over 100,000 people from Kayah state and neighboring Shan state fled their homes as fighting erupted between the military and a civil resistance group known as Karenni People’s Defense Force (KPDF) since May 21.

The KPDF announced the suspension of attacks on junta forces in Kayah and Shan states on June 15 following mediation by religious leaders as the displaced face a growing humanitarian crisis.

Gunfire has fallen silent in the region but the situation remains dire as restrictions on humanitarian response remain, according to church sources.

In Chin state — an impoverished hilly region in western Myanmar — local churches have filled the gap in humanitarian assistance for thousands of people who have taken refuge in churches, relatives’ houses and in the jungle.

Thousands of people face a desperate lack of food, medicine and proper shelter due to the roadblocks by the military and restricted humanitarian assistance.

Various parishes in Mindat town and nearby villages led the emergency response to provide food and non-food items to IDPs through private contributions.

Mindat, with an estimated population of 12,000, was under attack by the military with air strikes and heavy weaponry after negotiations collapsed as the military failed to meet the demand of the Chinland Defense Force (CDF) to release detained protesters.

Local priests have played a vital role in setting up temporary camps and bringing hundreds of people from the jungles into churches.

“We try hard to provide food to the people from what we have as UN agencies and NGOs have yet to get permission from the military,” said Father Joseph Se Thang from Mindat.

Last week the priest distributed 350 rice bags to displaced people in nearby villages who came to the church and carried them with their motorcycles.

Christian leaders helped mediate a 14-day truce between the military and the CDF, with both sides agreeing to lift roadblocks and allow humanitarian aid through on June 21.

Amid the truce, around 70 percent of people from Mindat have returned to their homes to take things they will need in the future.

“The return of people to their homes is just temporary as they are deemed not safe for staying any longer as soldiers have been deployed in the town,” said church social worker Raymond Mang*.

He said people can carry rice bags on motorcycles but need permission to carry aid in cars despite the roads being open.

More than 230,000 have been displaced in Kachin, Kayah, Karen, Chin and Shan states as a result of fighting between the military and ethnic armed groups and people’s defense forces following the Feb. 1 coup.

* Names have been changed to protect identity and for security reasons. 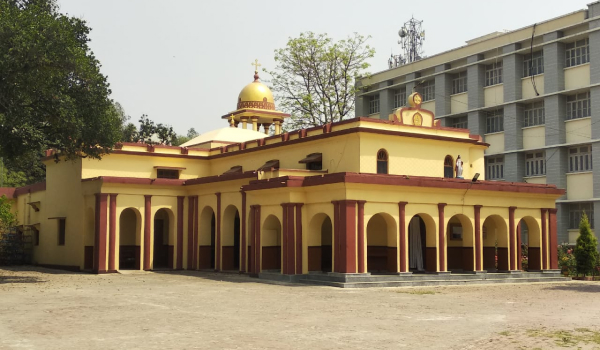