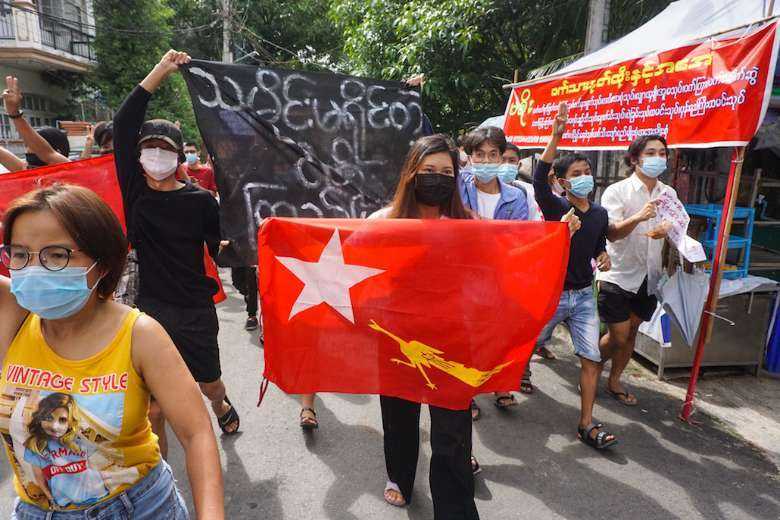 A protester holds the National League for Democracy flag during a flash mob demonstration against the military coup in Yangon on June 25. (Photo: AFP)

A Catholic missionary priest says the Myanmar Church is facing an hour of confession of faith, courageous witness and martyrdom under the repression following the military coup that toppled an elected civilian government on Feb. 1.

Father Gianni Criveller, from the Pontifical Institute for Foreign Missions (PIME), said Myanmar protesters have faced “a nightmare of repression and violence.”

“For the Myanmar Church, this is the hour of confession of faith, courageous witness and martyrdom,” he told ACI Stampa, Catholic News Agency’s Italian-language sister news service.

He currently serves as the dean of PIME’s International Theological Seminary in Monza, Italy, just north of Milan, and he has been going to Myanmar since 2018 to contribute to a training program for diocesan seminaries.

PIME missionaries' work of evangelization began in Myanmar, formerly known as Burma, in 1868.

Father Criveller lamented that the criminal military junta has denied the results of the democratic elections in November 2020, dissolved the civilian government and arrested leader Aung San Suu Kyi.

He said Catholics have been among the hundreds of protesters who have been killed by the military crackdown on those who took to the streets opposing the coup.

“Numerous Myanmar nuns in Italy are in anguish over the fate of their families as many have fled their homes amid the violence,” the Italian priest said.

During peaceful protests and prayer vigils held in recent months, Catholic priests and nuns have joined people from various religions to show solidarity with the people.

“Catholics are only a tiny minority but they have an awareness of the dignity of the human person, of the primacy of conscience and of the evangelical good of freedom, whose author is Jesus himself,” Father Criveller noted.

The priest said he had been impressed to see Catholics stand beside Buddhists calling for freedom and peace.

“As John Paul II indicated, dialogue between believers of different faiths is for peace among peoples. Christians and Buddhists are on the street not with weapons but with the rosary and the Buddhist pa-dee. They are a wonderful example for the Church in the world,” he stressed.

“Many young in Myanmar are willing to die rather than live without freedom. Christians do not seek martyrdom, nor do they search for it, but they accept it to remain faithful to Jesus.”