Myanmar's State Counselor and Foreign Minister Aung San Suu Kyi meets Pope Francis at the Vatican on May 4. The Vatican and Myanmar formally agreed to establish full diplomatic relations, to confirm an accord that is the latest step in the South East Asian state's rehabilitation by the international community. (Photo by Tony Gentile/AFP)

Church leaders in Myanmar were overjoyed when they heard that the Vatican and Myanmar would be formally establishing diplomatic ties.

The official decision came shortly after Pope Francis met privately with State Counselor Aung San Suu Kyi at the Vatican May 4. The Vatican then announced the pope would appoint a nuncio to Myanmar and receive an ambassador from the Southeast Asian nation.

Father Maurice Nyunt Wai, executive secretary of the Catholic Bishops' Conference of Myanmar, said he looked forward to the country becoming part of the international community after being isolated for more than six decades under military dictatorship.

"It is beneficial for interreligious dialogue and will help the peace process," Father Nyunt Wai told ucanews.com, referring to ongoing conflict between ethnic groups and the Myanmar military in Kachin and northern Shan states.

"It's a great opportunity for the nation," he said.

Bishop Alexander Pyone Cho of Pyay said the meeting was good news for the Catholic Church in Myanmar.

"The Catholic Church will have more of voice in nation-building especially in the peace process and interfaith dialogue so it is really helpful not only for the church but also for other religions in the country," Bishop Pyone Cho told ucanews.com. 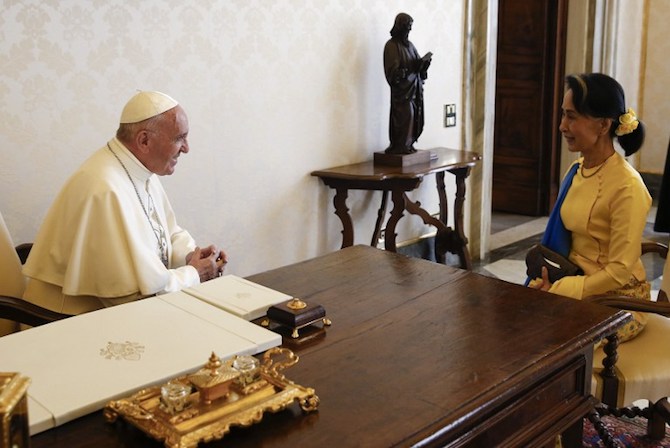 Myanmar's State Counselor and Foreign Minister Aung San Suu Kyi with Pope Francis at the Vatican on May 4. They met privately for more than 20 minutes. (Photo by Tony Gentile/AFP) 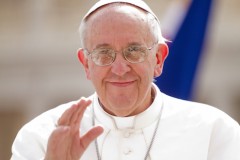 Cardinal Bo calls on Catholics to be signs of hope

Sister Margaret Maung, president of the Catholic Religious Conference of Myanmar, said she was very proud when Suu Kyi met with Pope Francis.

"We have many expectations that we can carry out now including building peace through interfaith dialogue because religious leaders have a very important part to play in ending conflicts across the country," Sister Maung told ucanews.com.

Cardinal Charles Bo of Yangon recently convened an interfaith peace conference where he urged religious leaders to promote peace in the country that has been stricken with civil wars for nearly 70 years.

Father Nyunt Wai said the pope and Suu Kyi should discuss the peace process throughout Myanmar and not focus solely on the Rohingya issue.

Suu Kyi, a Nobel peace prize laureate, won international support for her fight for human rights and democracy but her government has been under fire for a months-long campaign of persecution against the Muslim Rohingya by the military which is still a key player in the country's politics.

Pope Francis prayed for Rohingya at a general audience on Feb. 18. "They are our brothers and sisters. They have been suffering for years. They have been tortured and killed just because they want to keep their traditions and Muslim faith," the pontiff said.

Father Nyunt Wai said, "We need to look with holistic view at Myanmar's challenges as the Rohingya crisis is not the only problem in Myanmar but also civil war, poverty, education and healthcare."

Bishop Pyone Cho said Pope Francis' prayer for the Rohingya in February showed that he is a loving spiritual leader.

"In my opinion, the pope used the term 'Rohingya' in his prayers because the international community use it but, for local people in Myanmar, it is very sensitive word because it means that they are citizens as opposed to illegal immigrants," Bishop Pyone Cho told ucanews.com.

Catholics are a minority in the Buddhist majority country of 51 million people. There are about 700,000 Catholics served by 16 bishops, more than 700 priests and 2,200 religious.