A protester holds a poster with an image of detained civilian leader Aung San Suu Kyi during a candlelight vigil in Yangon in March to honor those who have died during demonstrations against the coup. (Photo: AFP)

Children from Myanmar, where Christians have faced oppression and persecution in the recent conflict following the military coup, have joined a worldwide rosary campaign.

"One Million Children Praying the Rosary," organized by Catholic charity Aid to the Church in Need (ACN), is being held on Oct. 18 — the feast of St. Luke.

Over 181,000 children, including some in Myanmar and Afghanistan, have already enrolled in this year’s initiative involving children from around the world.

For this year’s event, ACN has provided meditation on the mysteries of the rosary for children in 24 languages along with a prayer to St. Joseph. Pope Francis has designated the Year of St. Joseph, which concludes on Dec. 8.

Yangon Archdiocese’s missionary of childhood has urged Catholics to join the rosary campaign from 3pm (Myanmar time) on Oct. 18. The archdiocese's social communication office will be livestreaming the event, which two auxiliary bishops from Yangon will join.

“I encourage all adults and youths to lead and join together with the children who will lead the rosary,” Bishop Alexander Pyone Cho of Pyay said in a letter.

A Catholic leader from conflict-torn Myanmar wrote a letter to ACN that the rosary has been a source of strength amid the difficult times the country is facing after February's coup.

“The situation has been bad for months now. The pandemic is rather severe in our area. All the villages are in lockdown. Praying the rosary daily is the only source of strength physically and psychologically in the villages,” said the clergymen, who withheld his name for security reasons.

“Our diocese will join you and pray for you and for your intentions. I am ever grateful to you for all your concern, love, kindness and generous support.”

Myanmar is on the brink of civil war amid the political turmoil following the coup that overthrew the elected civilian government. 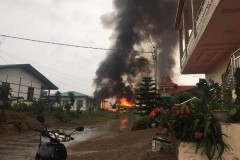 Fighting has been intensifying in ethnic regions including the predominantly Christian regions of Chin, Kayah, Kachin and Karen states where thousands of people have been displaced.

Amid the conflict, churches have been attacked, while priests and pastors have also been targeted by the military.

“In many countries, children, in particular, are suffering from the effects of war and persecution,” said Father Martin Barta, spiritual assistant to ACN International.

He said the rosary campaign is a good opportunity for children to pray together and express their solidarity.

According to the Vatican, the idea of the campaign was born in 2005 in Caracas, capital of Venezuela. While several children were praying the rosary at a wayside shrine, some women had a profound experience of the presence of the Virgin Mary. They recalled the words of St. Padre Pio, who, on seeing a group of children reciting the rosary, remarked: “When one million children pray the rosary, the world will change.”