Philippines to host congress for first time since 1937 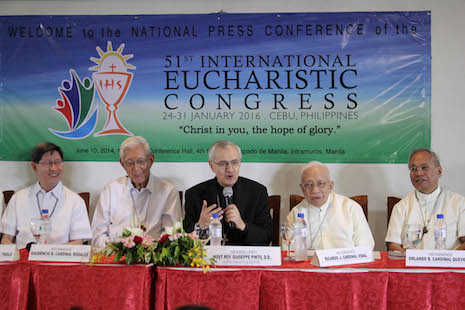 Archbishop Giuseppe Pinto (center), papal nuncio to the Philippines, speaks at the launch of the International Eucharistic Congress in Manila in September 2014. (Photo by Vincent Go)

Cardinal Charles Maung Bo of Yangon will represent Pope Francis in the 51st International Eucharistic Congress on the Philippine island of Cebu in January.

"It's Cardinal Bo of Myanmar. It was already announced that he is the papal legate," said Elvira Go, chairwoman of the congress' Committee on Promotions and Publicity.

Go said preparations for the congress are "80 percent ready," with the pavillion where the congress will be held undergoing improvements.

The gathering, which carries the theme "Christ in You, the Hope of Glory," will be hosted by the Archdiocese of Cebu.

"[The participants] will share our own way of thanking the Lord, and will experience other dimensions of the faith, such as our Filipino popular religiosity, devotions, the way we pray, and our joyful fellowship," he said.

The gathering is expected to draw at least 15,000 participants from more than 90 countries.

Archbishop Piero Marini, president of the Pontifical Committee for International Eucharistic Congresses, told a Vatican news conference that holding the congress in the Philippines will allow people throughout Asia and the South Pacific to attend more easily than they could have if it were held in Europe or North America, Catholic News Service reported.

The events open on a major religious feast day in the Philippines, the feast of the Holy Child, commonly referred to as Santo Nino, CNS said.

The Philippines last hosted the spiritual gathering in 1937 in Manila during the pontificate of Pope Pius XI.