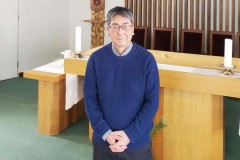 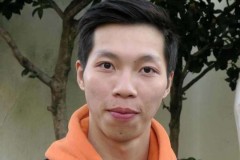 When Buddhist San Shwe Mya’s uncle, a Christian, tried to speak about Jesus Christ, he was annoyed and paid little attention.

“I told my uncle he couldn't persuade me to convert to Christianity as I had no interest in it,” San Shwe recalled.

Living in a remote village in western Myanmar’s Rakhine state, work was the first priority for the 43-year-old father of three children. “We have to rely on ourselves for our livelihood, so work was the only thing on my mind,” he said.

San Shwe belongs to the ethnic Chin tribe and grew up in a Buddhist neighborhood in a village in Minbya town. He followed his parents' Buddhist religion.

His Buddhist-majority village has a few Christians including some Catholics. He could see how the Christians faced daily challenges while practicing their faith. “But I had no idea about Catholicism or Christianity,” he recalled.

San Shwe remembered some radical monks and laypeople warning Christians and not allowing them to use loudspeakers during celebrations such as Christmas.

“I wasn’t involved with the group who opposed Christian celebrations but I witnessed the challenge of being a Christian in a predominantly Buddhist community,” he told UCA News. His native village was remote but it was close to where intense fighting between the military and the Arakan Army had been going on since December 2018.

More than 90,000 people had been displaced due to the conflict in Rakhine that also spilled into neighboring Chin state, home of many Christians, mostly ethnic Chin.

The violence forced even San Shwe to leave for Yangon, Myanmar's commercial hub, looking for employment and, more importantly, education for his children.

Arriving in Shwe Pyi Thar township on Yangon’s outskirts in January 2019, San Shwe struggled to find a job and a place to live.

In this new and tough environment, he had his first encounter with the charitable works done by Catholics. “It was totally different from what I had known about Christians in my native village,” San Shwe told UCA News.

The new encounter and the good deeds inspired San Shwe to find out more about Catholicism, the Bible and their God

Catholic volunteers would visit regularly to donate food and other essentials to needy people regardless of their religion or race.

The new encounter and the good deeds inspired San Shwe to find out more about Catholicism, the Bible and their God.

After some months of deep contemplation, San Shwe accompanied by his relative Cezar Zaw Zaw Aung approached the local parish priest and told him that his family wanted to become Catholics.

St. Gemma Galgani Parish in Shwe Pyi Thar township is home to 320 Catholic families, most of them daily wagers.

For more than 18 months, San Shwe got a chance to study catechism, sacraments and the Bible with the help of his relative Zaw Zaw. “Before receiving baptism, I had a dream of someone telling me not to convert to Catholicism as I was a Buddhist for more than 40 years,” San Shwe said. But he persisted with his new faith.

Five members of San Shwe’s family including his wife, two daughters and a son were baptized last November after months of preparations.

Parish priest Father Paul Aung Myint Win said he first encountered San Shwe's family during a community outreach program in a locality where most of the families were Buddhists with very few Catholics.

“His conversion is not because of the help extended by the Catholic community but because of his willingness and commitment to Catholicism after his own witness and his own experience,” the Dominican priest told UCA News.

Father Win said San Shwe himself chose a Christian name, Titus, from the Bible and he practiced saying it even before receiving baptism.

San Shwe and his wife received the sacraments of confirmation and marriage in February and his children are attending catechism classes for receiving communion, the priest said.

Zaw Zaw, who had fled from the fighting in Rakhine and reached Yangon's outskirts in late 2018, said he tried to explain the faith and catechism to San Shwe as he was eager to know about Catholicism.

“I didn’t persuade him to become a Catholic but I urged him to trust in God and put his hardships into His hands,” Zaw Zaw said.

He said San Shwe witnessed the life of Christians and their charitable works in a new environment in Yangon.

“In Yangon, Christians don’t face restrictions like in Rakhine even though Buddhists are a majority here too. Christians have freedom of religion here,” Zaw Zaw told UCA News.

San Shwe has no more worries as his new faith helps him to deal with his daily struggles and hardships, Zaw Zaw said.