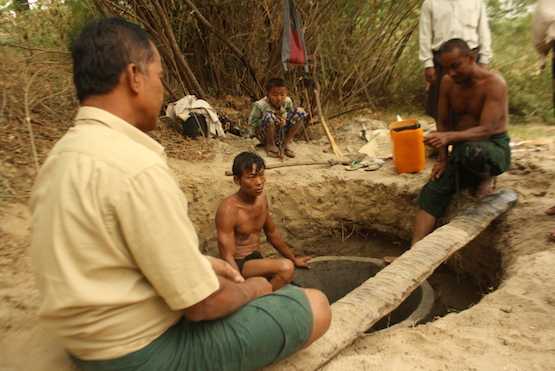 Villagers ready a water tank to store water as the country prepares to withstand the worst effects of a drought brought on by the El Nino phenomenom, in Taungtha Township in central Myanmar in this Feb. 27 photo. (Photo by John Zaw)

Khin Mg Tun sits looking at his meager peanut crop and wonders what could have been if only there had been a little more rainfall during the growing season.

"A lack of rain last year resulted in a poor harvest so I, and other villagers, face serious challenges ahead," the 47-year old farmer from Letpankone in central Myanmar told ucanews.com.

These challenges include day-to-day living as well as planting the next crop.

A prolonged drought has had a disastrous effect on traditional crops such as sesame, peanuts, beans and peas, according to Khin Mg Tun.

As a result many villagers have been forced to work in other areas as daily laborers to make ends meet.

In the villages of Letpankone and Hlaekuma, in Taungtha Township, hand-dug wells dried up in early February. The only source of drinking water for 1,400 villagers are two machine-dug wells.

Ashin Santima, a local Buddhist monk, pointed to a mud track, which he said was once a stream.

"We started facing serious difficulties regarding drinking water and crops last year as a result of drought," said the monk who has lived in the area for 40 years.

The rainy season usually runs from May to October, but last year little rain fell and there's been none at all since October, he said.

Meteorologists say the country is feeling the effects of the El Nino phenomenon that plays havoc with weather patterns and brings on extreme conditions such as flooding or droughts.

These in turn can lead to other problems such as crop failure, wildfires, disease, as well as food and water shortages.

Local civil society groups in central Myanmar have been bracing for the El Nino effect and have started to supply water to villages running short.

Aung Kyaw Shine, a youth leader from Taungtha said he and other volunteers have distributed water to at least 70 villages since late 2015.

"In some villages, they get water from wells which are at least two kilometers from the village and it is salty," Aung Kyaw Khine told ucanews.com.

The El Nino threat has become a matter of concern for the new parliament with Lower House lawmakers urging the government to implement risk mitigation measures against the ill-effects of El Nino.

Lawmakers want to see a long-term plan for El Nino and have stressed the need to monitor expected impacts on food and agriculture and take fire preventive measures.

Meteorologists and government officials have warned the country could face severe heat, drought and water scarcity this summer.

Myanmar's Rural Development Department said at least 1,700 villages across the country could face water shortages this summer due to El Nino.

It has advised citizens, businesses and the public service sectors to store as much water as possible and use it sparingly to ride out the dry spell.