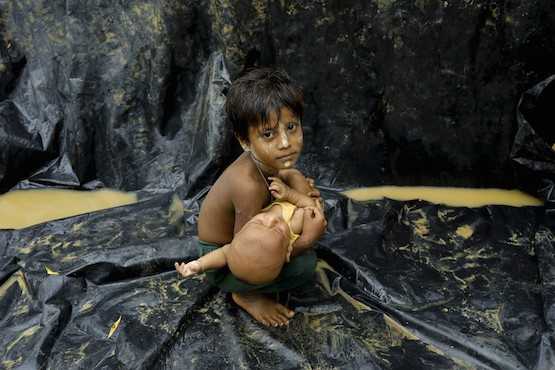 A Rohingya refugee from Myanmar's Rakhine State holds a baby after arriving at a refugee camp near the Bangladeshi town of Teknaf on Sept. 5. Nearly 125,000 mostly Rohingya refugees have entered Bangladesh since a fresh upsurge of violence in Myanmar on Aug. 25, according to the United Nations. (Photo by K.M. Asad/AFP)

The U.N. halted aid distribution in northern Rakhine State after militants attacked police posts on Aug. 25 and the army responded with a counterstrike that has reportedly killed hundreds of people.

According to the Guardian newspaper the office of the U.N. resident coordinator in Myanmar said aid had been suspended "because the security situation and government field-visit restrictions rendered us unable to distribute assistance."

"The U.N. is in close contact with authorities to ensure that humanitarian operations can resume as soon as possible," the office said. Aid was being delivered to other parts of Rakhine State, it added.

The military has been accused of atrocities against the Rohingya, while tens of thousands have fled burning villages to neighboring Bangladesh. Many reportedly reached Bangladesh after having been shot.

The U.N. refugee agency, the United Nations Population Fund, and Unicef said they have not been able to conduct any fieldwork in northern Rakhine for more than a week.

The U.N. World Food Program said it also had to suspend aid distribution to other parts of the state, leaving 250,000 people without regular access to food.

More than a dozen major non-governmental organizations including Oxfam and Save the Children have accused the government of restricting access to the conflict area.

These organizations are "deeply concerned about the fate of thousands of people affected by the ongoing violence" in northern Rakhine, the Guardian quoted Pierre Peron, a spokesman for the UN Office for the Coordination of Humanitarian Affairs in Myanmar as saying.