UN warns of mass deaths from starvation, disease and exposure after thousands are cut off from food, water and medicine 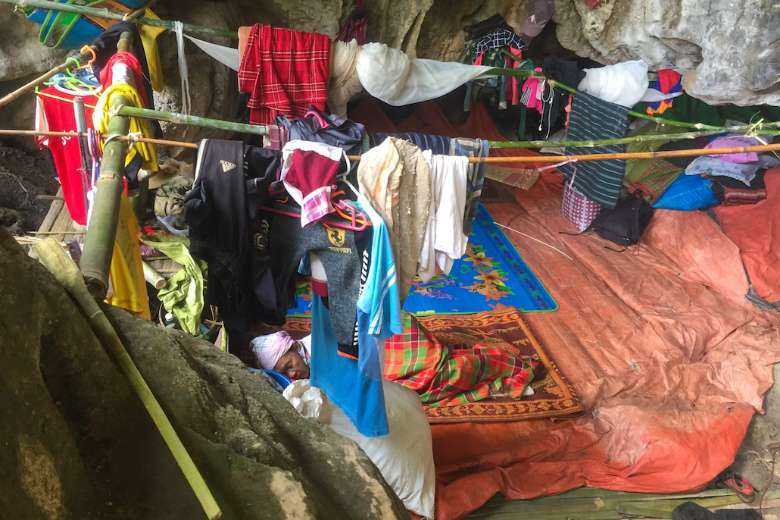 A woman sleeps amid belongings in a jungle area in Demoso, Kayah state, after people fled from conflict zones where fighting between the Myanmar military and the Karenni People's Defence Force. (Photo: AFP)

The Catholic Bishops’ Conference of Myanmar (CBCM) has appealed for a “humanitarian corridor" for thousands of displaced people who face starvation.

They said thousands of people in ethnic minority areas, especially the elderly and children, are starving in jungles after fleeing their homes.

“We plead with all kindly to allow the humanitarian corridor to reach out to the starving masses wherever they are. These are our citizens and they have basic right to food and safety,” the bishops said in a letter released on June 11.

The bishops also called on concerned parties to respect the right of sanctuary and sanctity of places of worship without specifying a particular armed group.

They said thousands have sought safety in churches and jungles, while three churches in Loikaw Diocese were recently struck by artillery shelling.

Nobody has won a war in this country. It is our duty to work towards peace

“Kindly observe the international norms of sanctuary in war times: churches, pagodas, monasteries, mosques, temples, schools and hospitals are recognized as neutral places of refuge during conflict,” the bishops stressed.

“We appeal that these places are not to be attacked and the people who seek refuge there should be protected.”

Seeking divine help to heal the conflict-torn nation, bishops urged dioceses across the country to launch intense prayers, make an adoration every day as a group or alone and to pray the rosary to seek compassion in the hearts of all.

“Nobody has won a war in this country. It is our duty to work towards peace. Human dignity is given by God and no amount of violence can negate people’s aspiration for human dignity,” the bishops said.

UN rights chief Michelle Bachelet has warned that an escalation in violence is unfolding across Myanmar and must be halted to prevent even greater loss of life and a deepening humanitarian emergency.

“As I had feared, armed conflict and other violence are intensifying in many parts of Myanmar, including Kayah State, Chin state and Kachin state, with the violence particularly intense in areas with significant ethnic and religious minority groups,” Bachelet said on June 11.

She said state security forces have continued to use heavy weaponry, including airstrikes, against armed groups, civilians and civilian property including Christian churches.

“More than 108,000 people have fled their homes in Kayah state over the last three weeks alone, many into forest areas with little or no food, water, sanitation or medical care. These are people in urgent need of humanitarian assistance,” she said.

“In just over four months, Myanmar has gone from being a fragile democracy to a human rights catastrophe.”

Mass deaths from starvation, disease and exposure could occur in Kayah state

Rice and other commodity prices are high and rice cannot be transported to Kayah state due to road blocks.

“The situation is getting worse and we are concerned that IDPs [internally displaced persons] will face starvation if the situation is prolonged,” Father Aung told UCA News.

The elderly, the sick, women and children have fled from villages to take refuge in the parish hall, boarding house, convent, clinic and old church in Loikaw, he said.

Fighting has been escalating in Kayah and neighboring Shan state between the military and the Karenni People’s Defence Force (KPDF) since May 21 after the KPDF killed police officers in Mobye, Shan state.

“Mass deaths from starvation, disease and exposure could occur in Kayah state after many of the 100,000 forced to flee into forests from junta bombs are now cut off from food, water and medicine by the junta,” UN rights expert Tom Andrews said.

More than 175.000 people have been displaced in Kachin, Karen, Chin, Kayah and Shan states since the Feb. 1 coup, according to UNHCR.

At least 860 people have been killed by security forces since the coup, mostly anti-coup protesters.