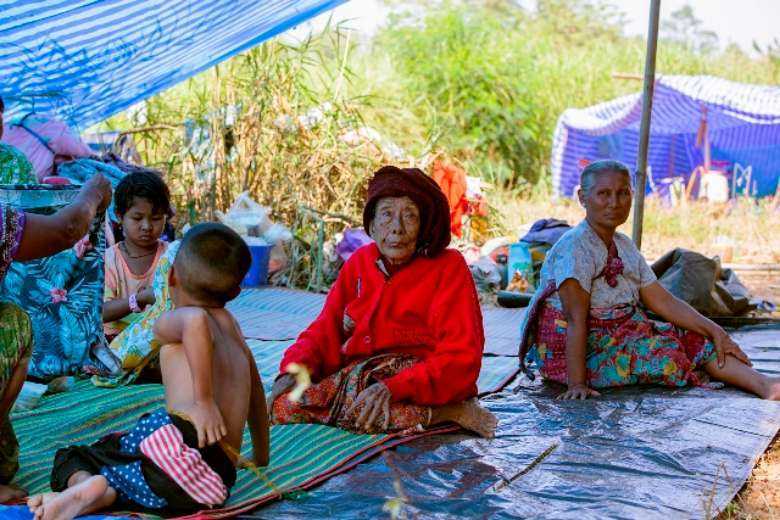 Myanmar refugees, who fled a surge in violence as the military cracks down on rebel groups, rest after crossing a river on the border in Thailand's Mae Sot district, on Jan. 15. (Photo: AFP)

The Catholic Bishops’ Conference of Myanmar (CBCM) has appealed for humanitarian assistance for the thousands of displaced people in the conflict-stricken Southeast Asian nation.

“As the CBCM stands for justice, peace, reconciliation, it strongly demands all concerned to facilitate humanitarian access to suffering and internally displaced people in order to provide them the basic humanitarian assistance,” the bishops said in a joint letter released on Jan.14.

CBCM president Cardinal Charles Bo, general secretary Bishop John Saw Yaw Han and 16 other bishops are among those who signed the joint statement at the general assembly held in Yangon from Jan. 11-14.

“Human dignity and the right to life can never be compromised,” said the bishops while adding that “we strongly demand respect for life, respect for the sanctity of sanctuary in places of worship, hospitals, and schools.”

The junta has unleashed airstrikes and artillery shelling, forcing thousands of people including women, children, the elderly and the infirm to flee their homes to seek refuge in nearby jungles or churches in neighboring villages and towns.

We are inspired by the fellowship of all our Myanmar people, who compassionately welcomed the fleeing people, housed them and fed them

Churches and other community institutions are being deliberately targeted by junta forces in predominantly Christian Kayah, Chin and Karen states. The latest incident was reported at a parish church in Loikaw Diocese which was hit by an airstrike.

The bishops expressed their deep concern over the worsening situation in the country, especially the well-being of innocent people in the conflict areas regardless of race and religion.

They expressed appreciation for all the priests, religious and catechists who were providing pastoral accompaniment and sacramental support to the needy despite great dangers to their own lives.

“We are inspired by the fellowship of all our Myanmar people, who compassionately welcomed the fleeing people, housed them and fed them,” the bishops said.

“This nation will be healed by such gestures,” they added while appealing to all Catholics to promote peace through intense prayers.

Nearly 350,000 people including Christians have been displaced from the Kayah, Karen and Chin states since the military coup on Feb. 1, 2021.

The United Nations Development Programme warned last month that half of Myanmar’s population of 55 million could plunge into poverty due to the Covid-19 pandemic and political instability following the coup.

OLIVER E SOE THET
Cardinal Charles Bo better share some portion of the great Christmas cake he cut together with the one who drops the bombs on churches, burns Christian cities. Charles Bo lost it and better come up with his own personal donation to all Myanmar people - just sell some property in Yangon for Millions of $ US and share as Jesus shared the bread with thousands... Charles Bo on the wrong foot on the wrong road sure not a Christian road. Sharing Cake when others get burnt alive is a NO GO at any religion, any time, anywhere.
Reply