Myanmar bishops ask pope not to use Rohingya term during visit

The visit, aimed broadly at helping the troubled peace process in the strife torn country, welcomed by faith leaders 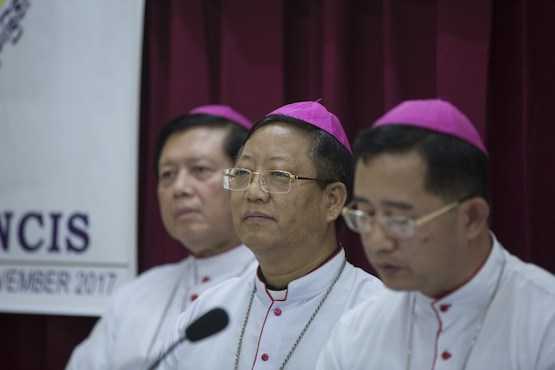 Bishop Felix Lian When Thang, president of the Catholic Bishops' Conference of Myanmar, attends a press conference about Pope Francis' visit to Myanmar, in Yangon on Aug. 28. Pope Francis will visit Myanmar and Bangladesh later this year, the Vatican announced on Aug. 28, hours after the pope decried the plight of Rohingya Muslims as they flee fresh fighting between the army and militants. (Photo by Aung Kyaw Htet/AFP)

The Catholic Bishop's Conference of Myanmar (CBCM) have suggested to Pope Francis not to use the term "Rohingya" when he visits Myanmar for three days in November.

The CBCM put forward their suggestion to the pope's representative in the country Archbishop Paul Tschang In-Nam, during their bi-annual meeting in June.

"We just gave suggestions that the word Rohingya remains a sensitive issue in the country and it is better not to use it during his visit," said Archbishop Alexander Pyone Cho of Pyay, whose diocese covers Rakhine State.

The bishops made their suggestion after they became aware of the pope's plan to switch the first leg of his trip from India to Myanmar.

Leaked news of the pope's visit earlier created unrest on social media in the country, which has suffered simmering tensions between Buddhists and Rohingya in Rakhine State since 2012.

In this time, the use of the term Rohingya, the name the group self-identify with, has become a sensitive issue. The government and military — along with many Myanmar citizens — instead refer to the Rohingya, who number up to 1.1 million, as "Bengalis" claiming they hail from, neighboring Bangladesh. Women and children fleeing violence in their village arrive at Yathae Taung township in Rakhine State in Myanmar on Aug. 26. Terrified civilians tried to flee remote villages in Myanmar's northern Rakhine State for Bangladesh on that day to avoid clashes between suspected Rohingya militants and Myanmar security forces. (Photo by Wai Moe/AFP)

Those with few concerns

"As a religious leader, Pope Francis can use Rohingya in his prayers in Myanmar as this is not an attempt to interfere with another country's politics," Wunna Shwe told ucanews.com.

He said that the pope's visit would accelerate harmony and dialogue among the country's different faiths.

Ashin Thuriya, a Yangon-based monk involved in interfaith activities, said he is very glad that Pope Francis will visit Myanmar and agrees it will bring harmony to the country.

"I have no concerns on whether the pope will talk about the Rakhine issue as I understand that the Catholic leader already understands the reality of Myanmar," Ashin Thuriya told ucanews.com.

Bishop Pyone Cho said the pope's Nov. 27-30 visit is for all of Myanmar's people and is aimed at helping bring peace to the country. The visit is not about the Rakhine issue unlike how the international media try to link it to, he said.

Kyaw Min, chairman of a Yangon-based Rohingya party — the Democracy and Human Rights Party — said the pope should decide himself whether to use the term Rohingya. "I appeal to Pope Francis to discuss the plight of Rohingya when he meets with government's leaders," Kyaw Min told ucanews.com.

Kyaw Min said he condemned the recent violence committed by Rohingya militants in Rakhine State. "Violence will not bring solve the problem," he said.

Attacks on dozens of police and border posts in northern Rakhine by the Arakan Rohingya Salvation Army on Aug. 25 marks a dramatic escalation of the conflict that has simmered since October 2016 after similar attacks led to a military crackdown that forced thousands of Muslim Rohingyas to flee or attempt to enter Bangladesh.

The death toll from the recent violence has risen to 104, mostly Rohingya militants plus 12 security forces and several civilians, according to government statements. Myanmar's security forces continue so-called clearance operations in the north of Rakhine State.

Bishop Felix Lian Khen Thang, president of CBCM, said the pope is known for his humility and advocacy for those marginalized and poor.

"As the Catholic Church is committed to take part in nation building, his presence in Myanmar will further enable the role of the church in the country especially in education, healthcare, environment and women and children," Bishop Felix Lian Khen Thang of Kalay told ucanews.com.

The bishop added that the visit will help the country's development during its transition to democracy.

After Myanmar, the pope will visit neighboring Bangladesh from Nov. 30 to Dec. 2.