Bishop Alexander Pyone Cho (center) sits with Muslim and Hindu leaders during a ceremony in Rakhine State capital Sittwe on Sept. 30 to transfer a donation of US$100,000 from Pope Francis. (Photo courtesy of Archdiocese of Yangon)

Bishop Alexander Pyone Cho has called on all stakeholders to come together and seek a lasting solution to violent conflict in Myanmar that has caused a Rohingya Muslim refugee crisis.

His Pyay Diocese covers troubled Rakhine State, which has experienced the worst strife.

The Rakhine crisis is like an open wound that could not be instantly healed, Bishop Pyone Cho told ucanews.com.

He noted that international pressure is mounting on Myanmar, an apparent reference to calls for the prosecution of some members of the country's security forces for crimes against humanity in relation to killings and other abuses of Rohingya.

However, the 69-year-old bishop said the international community also needed to engage with stakeholders to assist in finding solutions.

He observed that while the foreign emphasis continues to be on human rights violations, local people tend to stress sovereignty issues. "We also keep in mind the international standards of human rights and human dignity," the bishop said.

Suu Kyi was trying hard to walk a "tightrope" on the vexed Rakhine situation between the still politically powerful military and local as well as foreign expectations, the bishop said.

Bishop Pyone Cho also said that Myanmar is still going through a "transition to democracy" following decades of military rule. He called for people in Myanmar to unify in a spirit of nation building that would bring prosperity and peace.

More than 700,000 Rohingya fled to Bangladesh in the wake of a Myanmar military crackdown that began in August 2017 following attacks on security personnel by Rohingya insurgents. 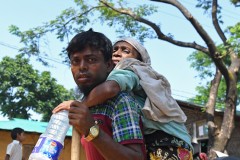 Sanctions will hurt Myanmar reform and invite China in 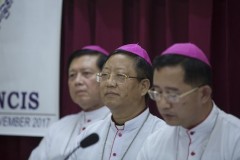 Myanmar bishops ask pope not to use Rohingya term during visit The U.N. Fact-Finding Mission recently found that Myanmar's military committed four of the five acts constituting genocide against the Rohingya. It said military chief Min Aung Hlaing and five other senior generals must be prosecuted for genocide and war crimes against humanity.

On Sept. 30, Bishop Pyone Cho and interfaith leaders were present at a ceremony in Sittwe, the capital city of Rakhine, as Aung Ko, Myanmar's religious affairs and culture minister, transferred US$100,000 donated by Pope Francis to the Rakhine government.

Bishop Pyone Cho said the government will use it for the development of Rakhine, especially to improve transport and water supplies.

"The pope's donation is for the development of all communities regardless of race and religion," Bishop Pyone Cho told ucanews.com.

Pope Francis visited Myanmar last November but did not go to conflict-torn Rakhine.

The pope avoided saying the word "Rohingya" during his four-day visit as the bishops of Myanmar urged him not to utter what they regard as a sensitive term that could have caused a backlash from nationalist groups.

Many people in Myanmar continue to view Rohinghya as illegal Bengali immigrants despite many having been in Myanmar for centuries.

According to diocese records, Catholics, mostly ethnic Chin, number only about 7,800 in Rakhine's three million population.

Christians comprise 1.4 percent of Rakhine's population, with Buddhists accounting for 63 percent, Muslims 34 per cent and Hindus 0.5 percent, according to Myanmar's 2014 census.