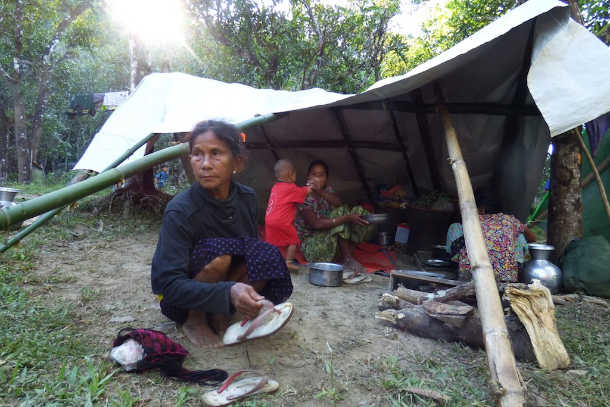 A Myanmar family displaced by fighting between government troops and the Arakan Army take shelter at a displacement camp housing over 700 people in Kyauktaw township in Rakhine State on Dec. 23. (Photo by AFP)

Bishop Alexander Pyone Cho has called on all parties to return to the negotiation table as fighting escalates in Myanmar's restive Rakhine State.

The bishop of Pyay said tensions remain high between the military and the Arakan Army.

"Solving the problem with arms will not lead to a solution, so both sides need to go to the negotiable table [and work] towards stability and peace," Bishop Pyone Cho told ucanews.com.

More than 4,500 people have fled their homes and taken refuge at monasteries and schools in four townships in Rakhine.

"Civilians pay the price of fighting and more people might be fleeing if fighting intensifies," the bishop said.

The 69-year-old bishop said the renewed fighting in Rakhine will have some impact on the peace process as Aung San Suu Kyi's government is trying to negotiate with all armed ethnic groups for a durable peace.

"It is a challenge for the government but I believe Aung San Suu Kyi will not give up her priority of getting peace as she is very committed to it," said Bishop Pyone Cho.

Myanmar's military declared a four-month ceasefire in northern and eastern Myanmar on Dec. 21, but Rakhine was excluded and operations against the Arakan Army have continued.

The Arakan Army was formed in Rakhine in 2009 to protect ethnic Rakhine people and it is estimated to have several thousand well-equipped soldiers. Bishop Alexander Pyone Cho of Pyay (left front) before the start of a Mass in Yangon on Jan.10. (Photo courtesy of Archdiocese of Yangon)

He said it is hard to tell how many Rohingya refugees in Bangladesh will return to Myanmar as many believe it is not safe.

"From Myanmar's side, it is ready to accept all refugees but from the Rohingya refugees' view, fear still remains," Bishop Pyone Cho told ucanews.com.

The instability in Rakhine might be one more reason for the refugees to remain in Bangladesh, he said.

The bishop acknowledges that international pressure will remain on Myanmar in 2019 but he warns that apportioning blame will only worsen the situation.

"The international community also needs to find out the positive things and give a hand to Aung San Suu Kyi's government to find a lasting solution," Bishop Pyone Cho said.

More than 700,000 Rohingya fled to Bangladesh in the wake of the military crackdown that began in August 2017 following attacks on security personnel by Rohingya militants.

A U.N. Fact-Finding Mission report found that Myanmar's military committed four of the five acts constituting genocide against the Rohingya. It said Min Aung Hlaing and five other senior generals must be prosecuted for genocide and war crimes against humanity.