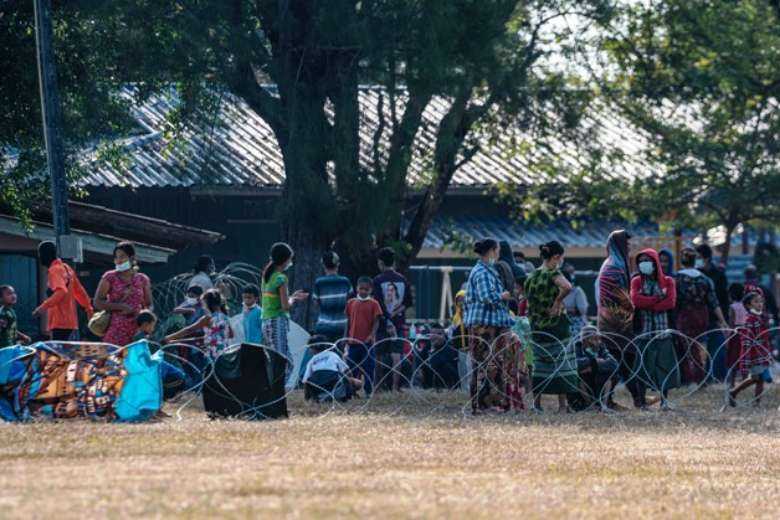 Myanmar refugees who fled their homes amid a surge in violence gather at a temporary shelter in Thailand's Mae Sot district on Dec. 18. (Photo: AFP)

Archbishop Marco Tin Win of Mandalay has urged Catholics in Myanmar to hold special prayers for peace in the Southeast Asian country torn by decades of civil war.

The prelate has designated every Saturday evening for one-hour adoration and the first Sunday of every month for Eucharistic celebration with the intention of peace.

All Catholics including the clergy, religious and laypeople have been called on to join him in praying for the nation facing “the crisis of Covid-19, hunger, civil wars and torture.”

Archbishop Tin Win is the only Catholic leader to openly lend moral support to the pro-democracy protesters by standing on the street in front of the clergy’s house in Mandalay last February.

The 60-year-old archbishop has been calling on Catholics to not lose hope and have a deep faith in God amid the fear, anxiety and hopelessness gripping their nation.

Myanmar has witnessed intense fighting between the military junta and rebel forces in the past few months in ethnic areas, including the predominantly Christian Kayah, Chin and Karen states, where civilians have been forced to leave their homes and flee to forests or take shelter in church institutions.

Humanitarian access to people in need in these parts of the country remains restricted due to the security situation, military checkpoints and lack of access approvals

Junta forces have been using airstrikes and artillery shelling against ethnic armed groups and local militias in the Christian-majority areas.

As of Jan. 3, some 192,300 people were reported to be displaced in the southeast region which includes Kayah, Karen, Mon and Tanintharyi, with some 4,700 crossing over to neighboring Thailand, according to a UN report on Jan. 11.

More than 1,550 houses and other civilian properties including churches and schools have been destroyed or burned down and 157,500 people remain displaced in Sagaing, Magway and Chin, the report added.

“Humanitarian access to people in need in these parts of the country remains restricted due to the security situation, military checkpoints and lack of access approvals,” the report said.

After more than five decades of military rule, Myanmar was set on the road to democracy, but the political, economic and social freedoms that began to sprout in 2011 were abruptly ended by the military coup last February.

The nation has since descended into political turmoil and widespread civil war after the military toppled the elected civilian government.

The ensuing reign of terror against civilians and pro-democracy protesters has led to more than 1,400 deaths and more than 10,000 people being detained.

Pope Francis has been praying for peace in Myanmar after daily Masses while also making repeated calls to end the violence and start negotiations.

“When will decades of civil war in Myanmar cease? When will we be able to enjoy true peace, with justice and true freedom? When will we stop killing one another?” Cardinal Charles Bo of Yangon said in his appeal on Dec. 26.